House of Songs, Live from the Ozarks! Iced-in in Arkansas, songwriters hunker down for an intimate live-streamed house concert in advance of trip to Folk Alliance 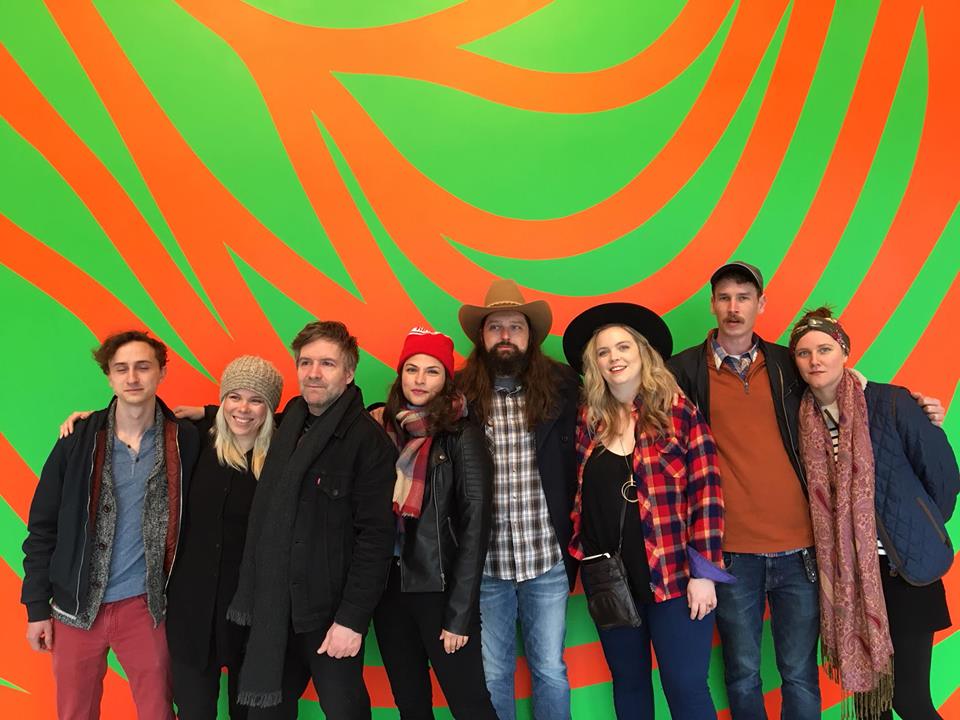 Inclement weather can thwart a lot of well-laid plans, but it’s no match against the power of song — or rather, the collective creative spirit of the eight songwriters from around the world holed up this weekend at the House of Songs Ozarks in Bentonville, Arkansas. After a productive week of getting to know each other, exploring the town and co-writing new songs together as part of the HOS winter international Songwriting Summit, the artists were originally scheduled to showcase their new creations this evening at the 600-seat downtown Bentonville venue Record. But when an ill-timed ice storm forced the cancellation of the gig (due in large part to hazardous road conditions impeding many of the venue’s staff from making it in from the next town over, Fayetteville), the group decided to instead hold the concert right in the House of Songs itself — with a Facebook Live stream set up to capture every note from 4 to 6 p.m. CST. (If audio does not play from embedded video below, follow the link above.)

“It was going to be a pretty big show at Record and the people there were really good to us, offering to let us use the venue and opening up the bar for attendees, but it was conditional on the weather cooperating, so that their staff could get to work safely,” explains songwriter Graham Weber, who helps manage the House of Songs’ homebase in Austin in addition to coordinating retreats at the now year-old Arkansas branch and other special events. “And up until yesterday it looked like the weather was going to be fine, but then we all walked into town to town for dinner last night and pretty much skated the whole way home. There’s like an eighth-of-an-inch of ice on everything. So on that skate back to the house I started coming up with a backup plan, and this morning we got to work on setting up the dining room to stage a house concert. It’ll be a lot more intimate, but it’ll still be a great show. I’m really excited for people to hear this stuff.” 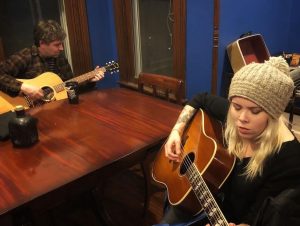 The “stuff” in question will include up to 15 brand new songs, all of them born in the last week as the artists paired off for multiple co-writing sessions inside the beautifully restored, four-bedroom 1891 Victorian that the House of Songs acquired last year. Just like the Austin chapter, HOS Ozarks brings in songwriters from around the world to collaborate with artists from the local music scene. Representing the latter at this year’s summit (and helping to hold down the Arkansas HOS fort year-round) are Fayetteville’s Eric Withans and Meredith Kimbrough. In addition to Weber himself, the out-of-towners are Nashville’s Tim Easton, Germany’s Ida Wenoe, the United Kingdom’s Danni Nicholls, Canada’s Dylan Menzie, and Weber’s fellow-Austinite, Jaimee Harris. Other local Bentonville/Fayetteville songwriters may perform tonight as well, if they can brave the roads. And weather permitting, Weber says a second showcase is also planned for Monday night at Fayettville’s Dickson Street Pub.

This was the House of Songs’ second winter summit in Arkansas, held at the same time as a similar gathering in Austin. The Austin group, overseen this year by Weber’s longtime friend and fellow HOS steward Matt the Electrican, has a showcase tonight, too — at the world-renowned Cactus Cafe. Alas, that one won’t be live-streamed, but seeing as how the Bentonville stream ends at 6 p.m. and the Cactus show starts at 7, Austin songwriting fans will have the opportunity to double their HOS fun by taking in both shows. The Cactus showcase will feature Austin songwriters Chris Fullerton, Little Brave, and Ali Holder, along with the U.K.’s Danielle Lewis, Australia’s Tom West, and Sweden’s Linnea Backlund.

And the show goes on even after tonight’s (and tomorrow’s) showcases in Texas and Arkansas. Because later this week, both House of Songs teams will head north to convene for the biggest HOS songwriters gathering of the year, at the annual Folk Alliance International Conference in Kansas City. Even if the Ozarks crew has to get there via Zamboni.

“It’s supposed to warm up by then,” insists Weber with a hopeful chuckle. “I’m driving the whole Arkansas group up there on Wednesday morning, and the weather is supposed to be in the 50s, so we’ll be alright. Might still be a little wet, but we’ll make it.”