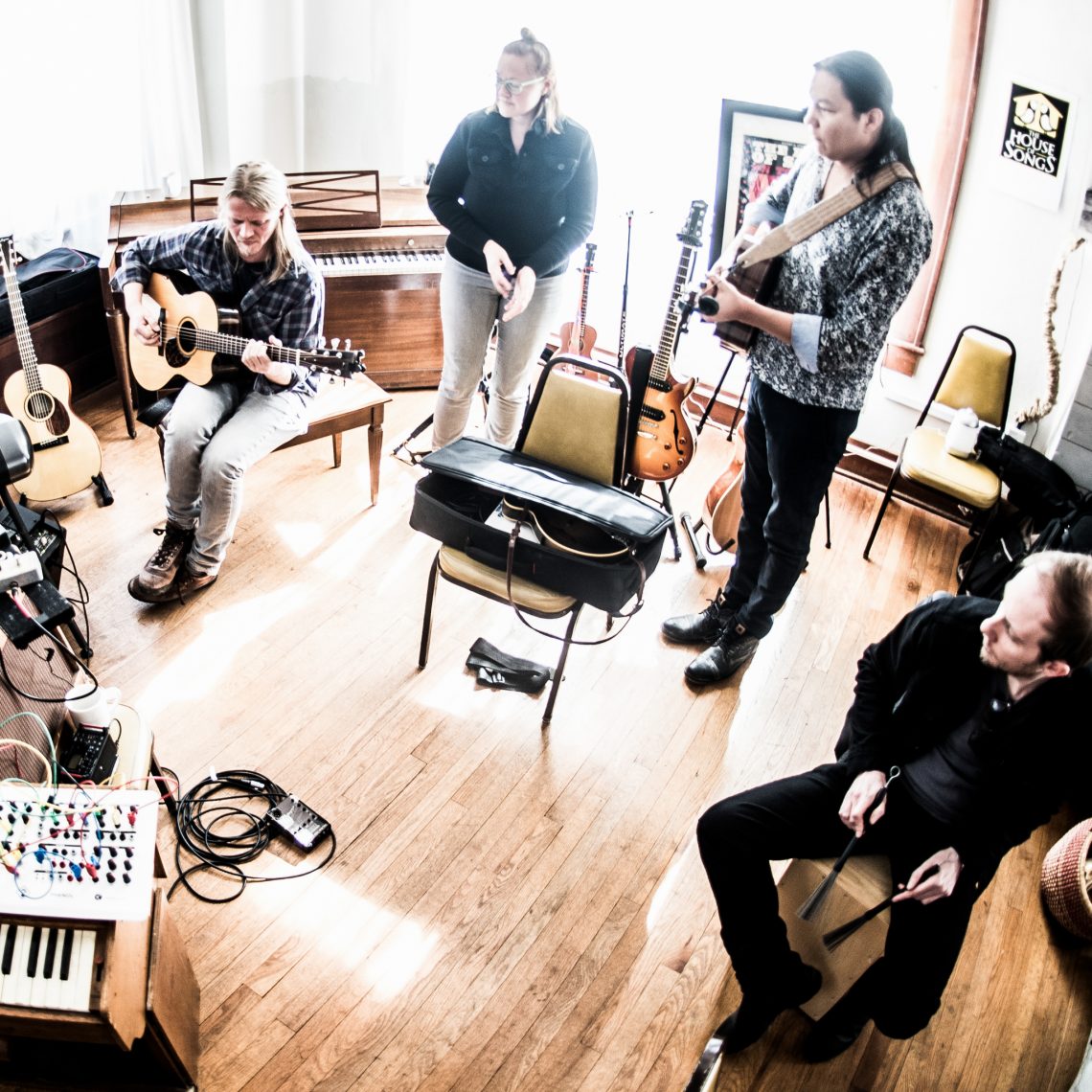 From left: John Elliot of San Francisco, Bayard Blain and Bernice Hembree, both of Fayetteville, Arkansas, Raven Kanatakta of Canada and Gareth Averill of Ireland work out a tune. (Photo by Jeremy Scott)

Eight years ago in a one-story Austin bungalow, a novel experiment was launched. Called the House of Songs, it brought local and Scandinavian songwriters together under one roof to cross-pollinate creatively, with the goal of fostering friendships and expanding career opportunities.

Like Austin, the area has a rich music scene, including a vibrant festival created by Bryan and Bernice Hembree, who helped arrange a pilot House of Songs Ozarks gathering in February. That weeklong session brought together 18 artists from Canada, Sweden, Ireland, the U.S. and elsewhere, including Native American and First Nations representatives, to share ideas and inspiration. In a 90-year-old dormitory in Mount Sequoyah, overlooking Fayetteville, they wrote 11 songs, several of which were showcased at the Folk Alliance International conference held the following week in Kansas City, Missouri. On Thursday, June 8, several House of Songs Ozarks artists will gather again — this time at the Kerrville Folk Festival, where they’ll perform at 7 p.m. at the Threadgill Theater on the festival’s Quiet Valley Ranch grounds, two hours outside of Austin. Single-day tickets are available at kerrville-music.com/tickets.

House of Songs founder Troy Campbell said the Ozarks maintains a somewhat insulated creative eco-system, one that deserves more nurturing. The Walton Family Foundation is endeavoring to do that; it invited the House of Songs to the area to complement other community-enhancing projects such as Bentonville’s admission-free Crystal Bridges Museum of American Art and a culinary school.

“Northwest Arkansas is a hotbed of creativity,” says Fayetteville resident Bryan Hembree, who co-founded the Fayetteville Roots Festival, now in its eighth year. Like other music festivals, it has driven cultural tourism to the area. But Hembree says there’s a distinction in this case.

“Bernice and I, as artists, very much consider it an artist-led festival … the people who support it and are involved, I think, identify with the artists leading it. That fits in with the House of Songs, where the artists are the drivers of the collaborative environment that Troy wants to build.” 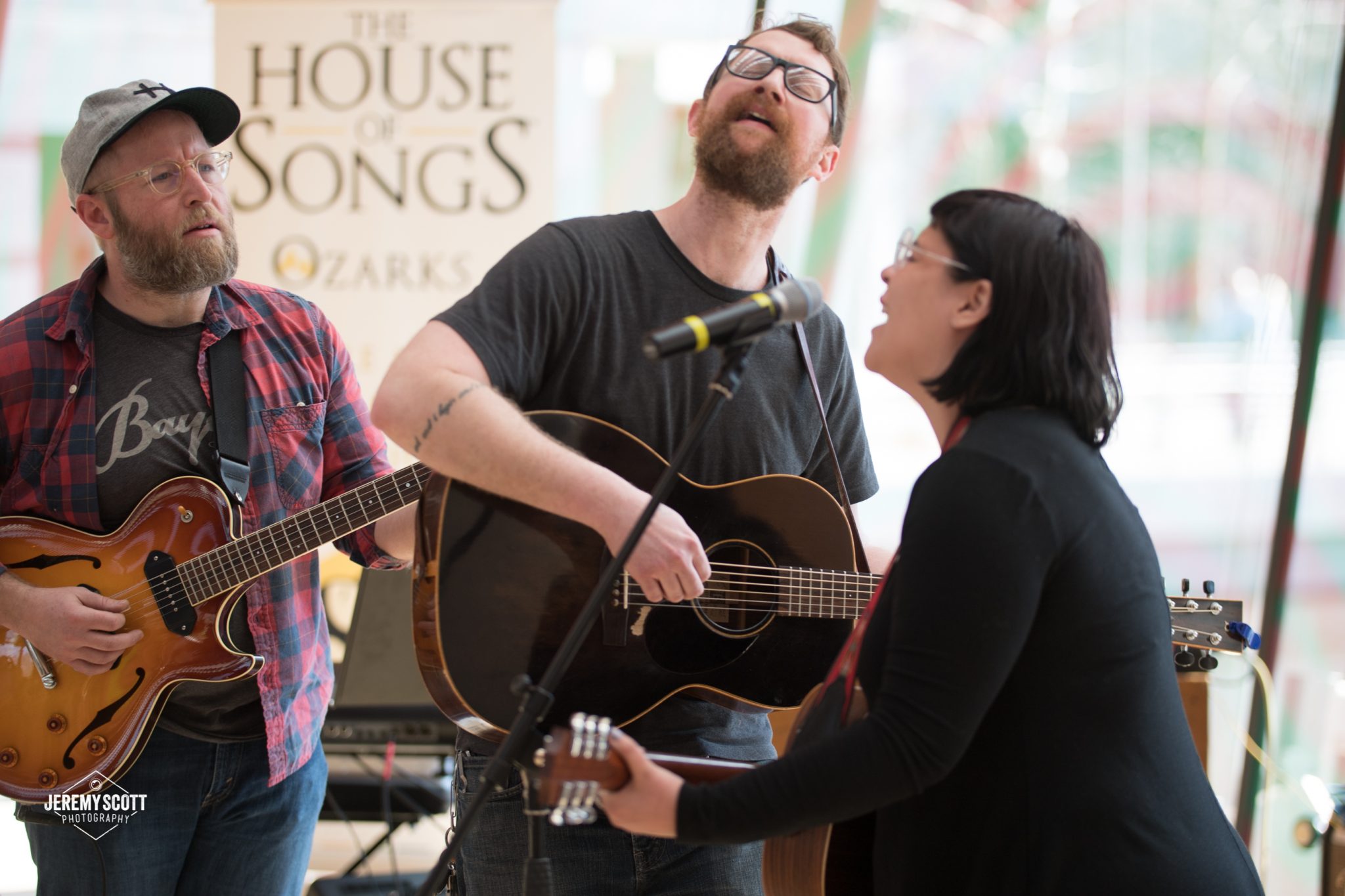 From left: Bryan Hembree and Ryan Pickop, both of Fayetteville, Arkansas, and Kalyn Fay of Tulsa, Oklahoma, work on a song together. (Photo by Jeremy Scott)

During that February session, the artists explored the entire region, film crew in tow, so they could capture not just the “farm-to-table” act of creating, but its impact on those who might experience the results.

“I wanted to go much deeper,” Campbell explains. “Our goal was to take this entire group and put ’em all around Northwest Arkansas to get perspectives. To not only write songs, but to go and engage others along the way. Everywhere we went, we would engage local artists and people, asking them questions and hanging out with them. We wanted to know why they lived here, why artists would want to live here.”

He sought to learn “who makes up the story and the sense of place … and the bigger picture — why it’s so secretive in some regards.”

He suspects it’s because the area simply doesn’t attract much attention, despite its affordability and the feeling of personal freedom it offers. Yet Swedish singer-songwriter Tom Levin, one of the 18 participating artists, found it incredibly inspiring.

“It’s just beautiful,” he says. “There’s something here that I haven’t experienced anywhere else.”

Fay will perform at Kerrville, along with Fayetteville band Smokey & the Mirror, Campbell and Austin artist Raina Rose, and Swedish singer-songwriter Rebecka Digervall, who has participated in several House of Songs residencies.

“Every time I’ve been in a project with the House of Songs, it’s always been an adventure,” she says. “It’s so special. I’ve made so many great friends.”

Fay and Digervall are among the writers credited on the first House of Songs Ozarks release, “Daughters of Sin,” for which a moving video was recorded by Jason Miller and Dave Abbott, with editing by co-writer Gareth Averill of Dublin, Ireland. (Watch it below.)

“We come from quite a few countries, but we have much more in common than what separates us,” says Denmark’s Stig Nielsen, another Ozarks collaborator. “When we start playing together and we write together, it’s a common soul language that we go for. And the environment, be that cultural or be that natural or be that musical, that all blends into something that can be heard in what we write here.”

Environment will no doubt inspire future House of Songs Ozarks collaborators, but ultimately, the goal really is to engage that “common soul language.” That’s what inspired Campbell to start the House of Songs in the first place.

Invited several years ago to participate in a songwriting summit on a wind-powered Danish island, he saw firsthand how the international language of music transcends cultural boundaries and bonds people together. He also saw how other countries support creative and collaborative endeavors, and wanted to offer similar opportunities in America. House of Songs participants have since shared international hits, far-flung tours before enthusiastic audiences and even Grammy nominations. But Campbell’s vision is even broader: In a world whose people are increasingly at odds with one another, he regards music as the “global handshake” that can open the door to greater understanding of our common humanity, and ultimately, peace.

“It’s about the conversation,” he explains. “We’ve got to support the thinkers of this world, or we’re gonna lose dialogue.” When dialogue dies, demagogues gain power; suffering inevitably ensues. 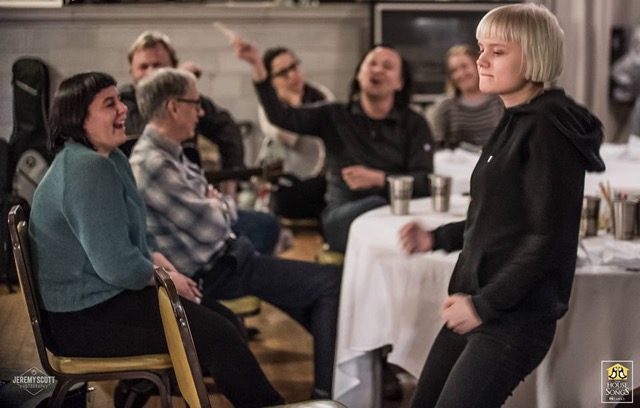 Kalyn Fay of Tulsa, Oklahoma, laughs as Rebecka Diggervall of Sweden gets down during a House of Songs Ozarks gathering. Founder Troy Campbell conducts in the background. (Photo by Jeremy Scott)

Just as bringing artists together stimulates conversation and collaboration, and bringing them into communities fosters awareness and growth, the two House of Songs wings came together in a similar spirit in February at the Folk Alliance conference after conducting separate sessions. Two distinct showcase rooms offered nightly performances by artists from the Austin and Ozarks sessions, and gave them chances to mingle and perform together.

“It went from being a dozen people to several dozen people,” Campbell says. Those who witnessed it could tell there were special, often spontaneous, connections forming among not only the artists, but their audiences, too.

“I think that shows the power of House of Songs,” says Hembree, “and how it’s continuing to grow.”