In Memoriam: Daniel Johnston, Jan. 22, 1961 – Sept. 10, 2019 Against the odds of mental illness and crippling stage fright, the "Cutting Edge" breakout found cult fame and "true love" in the hearts of devoted fans around the world 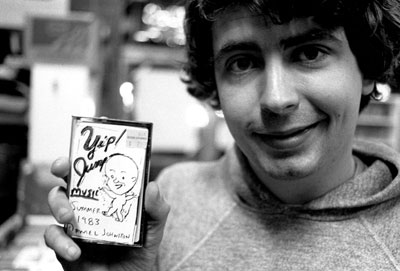 Outsider artist and singer-songwriter Daniel Johnston, a longtime icon of Austin’s alternative scene, died of an apparent heart attack at his home in Waller, Texas, on Tuesday. He was 58.

Johnston was known as much for his ongoing struggles with mental illness (he was diagnosed with schizophrenia and bipolar disorder) as for his creative output. But his nakedly personal songs, equal measures broken-hearted and sweetly optimistic (e.g., “True Love Will Find You in the End”) captivated fans around the world. He released more than 20 albums, both lo-fi home recordings and more conventional studio sessions. And his equally idiosyncratic visual sensibility — exemplified by his eccentric hand-drawn album covers, as well the famed “Hi, How Are You?” frog mural which graces the side of a building on Austin’s main drag — further demonstrate his highly individual artistic vision.

Johnston was born in Sacramento, California, and grew up in New Cumberland, West Virginia, before moving to Austin in the early 1980s. He emerged as a familiar and beloved fixture on the Austin scene, handing out copies of his homemade cassettes of his home recordings while working at a McDonald’s. Such early tapes as Songs of Pain, Yip/Jump Music and Hi, How Are You won him fans and local press coverage, and his notoriety spread, thanks to such breakthroughs as his appearance in an Austin-centric 1985 episode of MTV’s The Cutting Edge.

Johnson’s growing fame and expanding fan base led to a series of album releases on such prominent indie labels as Homestead and Shimmy Disc. Subsequently, despite Johnston being a resident in a mental hospital at the time, several major labels showed interest in recording him. The result was the artist’s brief stint on Atlantic, which spawned one acclaimed but commercially unsuccessful album, 1994’s Paul Leary-produced Fun.

Johnson also collaborated with such fellow iconoclasts as Yo La Tengo, Jad Fair, Lou Barlow, and Sparklehorse’s Mark Linkous, while his songs were covered by the likes of Tom Waits, Beck, and the Flaming Lips. TV on the Radio, and fellow Austinite Kathy McCarty, whose 1994 album of Johnston tunes Dead Dog’s Eyeball became a surprise underground hit. Meanwhile, Johnston’s visual art became an additional source of acclaim (and income) for the artist, with his work being shown in galleries around the world. His struggles and successes were documented in filmmaker Jeff Feuerzeig’s award-winning 2006 documentary feature, The Devil and Daniel Johnston, which further expanded his fame.

Johnston’s musical output slowed in the last decade and a half, but the fact that he only released four albums of new material in his last 25 years belied his fan base’s ongoing devotion. In the fall of 2017, Johnston embarked on what was billed as his “final tour,” a run of five North American dates on which he was backed by such admirers as Jeff Tweedy, Built to Spill, and the Preservation Hall All-Stars. He was beset by a series of health-related setbacks over the last couple of years, though, including one that landed him in the hospital on his 58th birthday this past January. That was the same night as Austin’s second-annual “Hi, How Are You Day” tribute concert, which drew a sold-out audience to the Moody Theater for an evening celebrating Johnston’s music and influence featuring performances by local heroes Bob Schneider and the Black Angels as well as a host of notable out-of-towers, including Built to Spill, Bob Mould, and headliners the Flaming Lips.