LSM Song Premiere: “Wildflowers in the Weeds” by Susan Gibson The Texas songwriter repays an honor from an old friend (and peer) in this track from her first studio album in 8 years, "The Hard Stuff" (out Oct. 4)

Susan Gibson doesn’t need reminding that it’s been a long time since the last time she released a full-length studio album. Maybe not quite Dixie Chicks long (13 years and counting), but still just shy of a decade. Which is to say, somewhere between “too long” and “what took you?”

Long story short, stuff got in the way. Hard stuff. In 2013, she lost her mother to cancer. Gibson channelled a lot of her immediate grief into a six-song EP, 2016’s bittersweet Remember Who You Are, but then had to endure it all over again with the passing of her father in 2017. “My family is a big deal to me, so just dealing with all of that caused a real shift in my focus in regards to my career,” Gibson explains. She still had to work, of course, but admits that “sometimes gigging was as much as I could do.”

In the end though, it was writing that pulled her through – beginning with a song about her mother called “Best of You” on that 2016 EP. “Grief is an important process, and it’s a real complicated, complex thing,” she says. “But I realized … what would my mom to say to me about wallowing in grief instead of writing songs about it? Because songwriting has always been a remedy to whatever I’m feeling. The problem was, I just wasn’t picking up that tool that I have to help myself.” 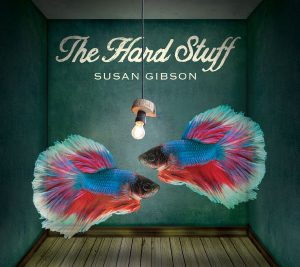 Susan Gibson’s new album, “The Hard Stuff,” releases Oct. 4 on her own For the Records label.

Remember Who You Are was the sound of Gibson doing just that. But the bold, beautiful, and ultra-confident The Hard Stuff, produced by guitarist Andre Moran of Austin’s the Belle Sounds and Gibson’s first full-length collection of new material since 2011’s Tight Rope, is more than just her next baby step back into the swing of things: It’s the best album that the award-winning singer-songwriter’s ever made. And yes, very much worth the wait. Gibson will release The Hard Stuff Oct. 4 on her own For the Records label, but Lone Star Music is proud to premiere the album’s penultimate track, “Wildflowers in the Weeds,” today.

Although the song is new, the seed for “Wildflowers in the Weeds” was planted more than 20 years ago with a friendship that began when Gibson was still a member of Amarillo’s the Groobees. It was through Groobees’ producer Lloyd Maines — who fortuitously introduced Gibson’s song “Wide Open Spaces” to his daughter Natalie’s band, the Dixie Chicks — that Gibson first met fellow Texas songwriter Terri Hendrix. The two women, each at an exciting time in their respective burgeoning careers, bonded from the start, and a couple of years later Hendrix gave Gibson a fond shout-out in “Goodtime Van,” the opening track of her fourth album, 2000’s Places in Between and still one of her all-time most popular songs.

“From that first line, ‘Susan headed out in her good times van,’ I was like, ‘Whoah! That’s me!'” Gibson marveled back in 2003, when Lone Star Music interviewed her on the occasion of the release of her own solo debut, Chin Up. She recalled the exact conversation they’d shared over wine that Hendrix was singing about. “We were talking about the grass being greener on the other side. I was still in the Groobees at the time and was looking at her gigs, going, ‘Wow, she’s playing with Lloyd Maines, and look at all this other fantastic stuff she’s doing,’ and she was looking at my situation, going, ‘You’re driving around with a bunch of guys and you’re all playing for peanuts, but you’re having a great time … I’d love that!’ So we were just kind of being nostalgic about each other’s lives. But what an honor: I know what I think about the things that inspire me, so that’s really neat to be a part of that in a Terri Hendrix song.”

With “Wildflowers in the Weeds,” Gibson now returns that honor in kind, albeit from a perspective informed by many more conversations over the course of another 20 years on that friendship odometer. It’s a deeply empathetic portrait of a kindred spirit artist not as a carefree young dreamer hitting the road “with no plans and a dog for company,” but rather as a mature woman bowed but unbroken by decades of real-world challenges, her faith tested by prayers that “fall from her lips straight to the ground” but her resilience and life’s work rooted in purpose.

“I feel like the song isn’t really about Terri — it’s for her,” says Gibson. “But I’m not just talking about her; I’m seeing myself reflected in her, after having the opportunity to really get to know her better and realizing how similar we are in what we love and hate and fear and revel in. We’ve had some similar successes, and we struggle with some of the same things, too.” 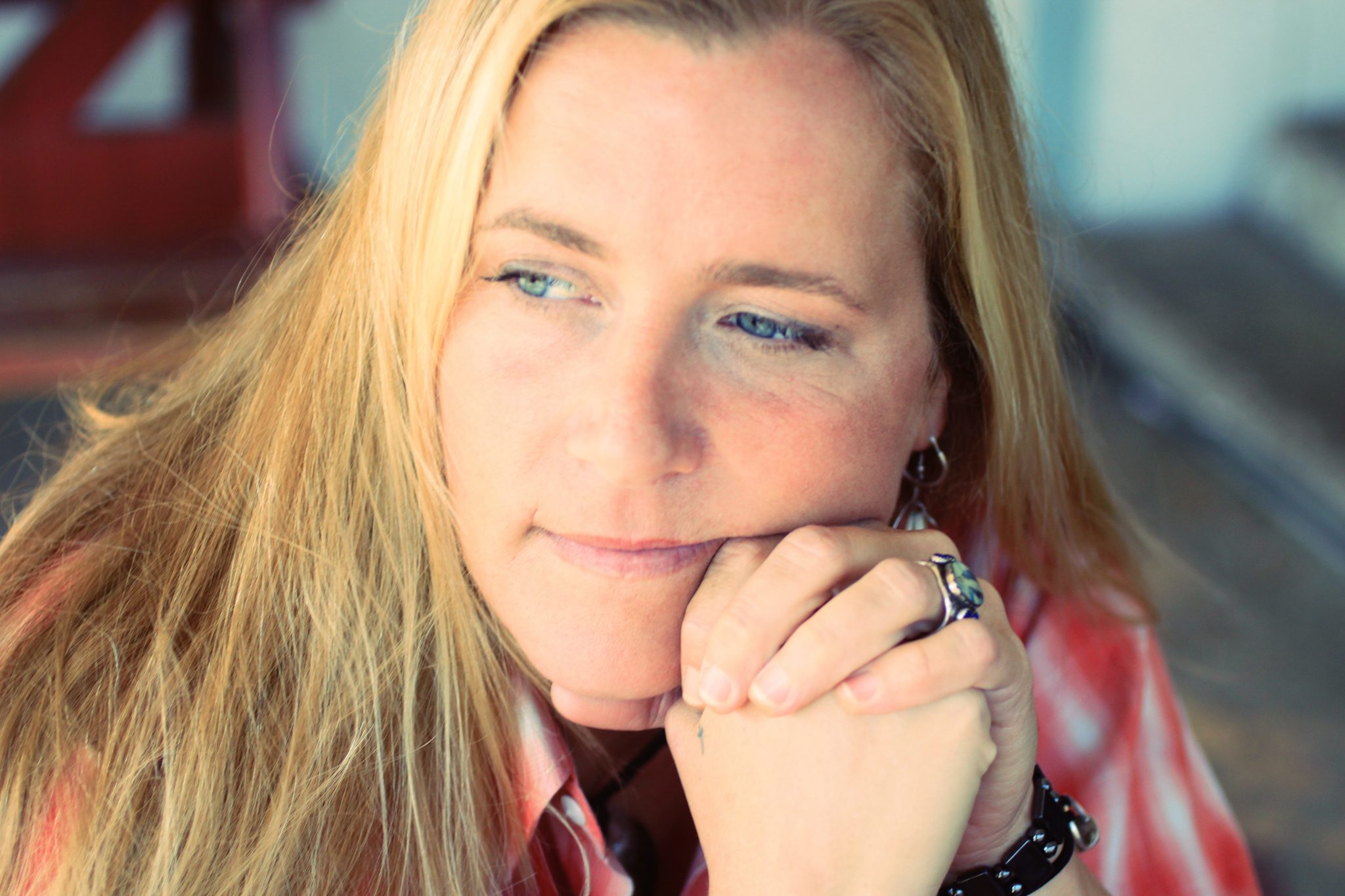 Stuff that Works: Susan Gibson recorded “The Hard Stuff” with producer Andre Moran, guitarist for Austin band the Belle Sounds. It was Moran’s suggestion to ease up on the power-chords that helped bring out the real beauty in Gibson’s song “Wildflowers in the Weeds.” (Photo by Todd V. Wolfson)

Even on a record where Gibson address matters as personal as the ache of missing her parents and pulls no punches in her own tough-love self analysis (“If you’re gonna be stupid, you better be tough,” she sings on the title track), the honest, open-hearted reflection of “Wildflowers in the Weeds” is striking. And the song’s quiet acoustic arrangement only enhances that sense of intimacy, setting it apart from the rest of The Hard Stuff‘s deliberately not folky vibe. But according to Gibson, her original version was radically different in tone, even though the lyrics remained the same.

“When I wrote the song and first took it into the studio, it had all of these chunky power chords in it and was real high energy,” Gibson explains. “I wanted it to be an empowering song, because I wrote it for Terri who I think is incredibly empowered, and because she empowers other people.” Somewhat ironically, it was producer Moran — who for the most part happily indulged Gibson’s desire to help her make an album as different from her typically spare, solo-acoustic live shows as possible — who convinced her to try a softer touch on the song. His reasoning was in part because The Hard Stuff already had at least a couple of other “power-chordy” keepers in the mix — most notably “Hurricane” and the exhilarating opener, “Imaginary Lines.” But as Gibson sums it a bit more bluntly (albeit with characteristic good humor), Moran might have also implied that song’s original energy leaned a bit “80’s hair-band-ish.”

“So I was like, ‘Well, I guess I could fingerpick it,'” says Gibson. “I was being sarcastic, but Andre said, ‘Yeah, try that!’ And when I did that, the whole song just meant something completely different. After hearing the more gentle treatment of it, I realized that I had been steamrolling over every beautiful moment in the song before that. It just really opened up the song and made it this really delicate thing, and it became way more vulnerable.

“But of course, that only made me more nervous for Terri to hear it,” she continues with a laugh. “She’d actually heard it once before, when I played it at a show we did together, but that was back when it was still the old version, where some of those more vulnerable lines were camouflaged by the power chords and driving beat. But without that it just felt so exposed that I thought about changing the name in the song and not saying ‘Terri,’ because I wanted to give her cover. I just didn’t want it to sound like I was telling secrets, you know what I mean? But in the end I kept it in there, and when I gave her the record I just kind of held my breath a little bit. And then she got back to me and said she loved it. She said it made her cry and made her feel all the things I was hoping it would and none of the things I was worried about. So, I think she’s okay with it! Which means a lot to me, because I really love the way that song turned out.”