Turnpike Troubadours: “Diamonds & Gasoline” (2010) Fans voted this the best Red Dirt album of the LSM era — and it wears that title well. 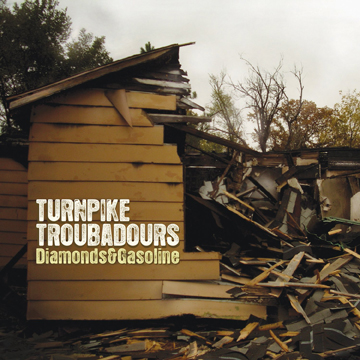 Whether you’re talking about the Grammys themselves or some Saturday battle-of-the-bands at the dive bar down the road, “music” and “contests” make for an entertaining yet uneasy combo. How many people are voting? Are they qualified, or at least endowed with good taste (usually meaning “you know, like me”)? Are the right acts/albums even nominated? What about diversity and biases and …

Anyhow, enough hand-wringing. Subjective contests shed light and spark conversations about what’s good and what’s significant. “Losing” means that someone thought you were at least potentially worthy of winning in an impossibly crowded field. The end of a tournament like Lone Star Music’s recent “Ultimate Texas Country vs. Red Dirt Album Showdown” isn’t an “end of discussion” moment; it’s just getting it started. So this discussion starts like this: the 2010 Turnpike Troubadours album Diamonds & Gasoline is, in the eyes and ears of fans of this site and this genre and this region’s music, the best full-length album of what we’ll call the Lone Star Music Era.

Voters had some tough choices, but this outcome is tough to condemn. The record is old enough to have had some time to sink in, but new enough to sound fresh to the ears. The band hasn’t squandered the goodwill this breakthrough album brought on; both of their subsequent releases have been arguably just as strong, and it’s been well established over the last couple of years that the Troubadours don’t have to take a backseat to anyone along the Texas/Red Dirt axis in terms of popularity, live draw, record sales etc.

Also, not to pander to the will of the people, but Diamonds & Gasoline is also really, really good.

Their out-of-print debut (2007’s Bossier City) was solid enough, but the Turnpike Troubadours hit an even better stride on their now-revered sophomore effort. Diamonds & Gasoline hits every note with confidence, skill, and passion, inspired music in the hands of talented players with much to gain and much to prove. By 2010 the states of Texas and Oklahoma had pretty much reached market saturation on homegrown country/folk/rock hybrids running the roads. There were dozens if not hundreds of singers and bands, playing to crowds of various sizes, jockeying for position on local-friendly radio playlists and multi-artist festival lineups. The idea of independent country (or country-ish) music was hardly foreign to venues and media outlets, so it was easier to get a foot in the door. It was just really hard to stand out … one solid strategy, as it turns out, was to make an outstanding album.

It’s not even easy to describe what makes Diamonds & Gasoline great. The band name and album name could have come out of a random Americana name generator app. The songs are mostly about girls and booze and broken hearts and road trips, and the instrumentation leans towards countrified, clean and straightforward. There’s no novel “hook” to the act that turns heads. But there’s also not a lame song among the twelve, not a wasted line in frontman Evan Felker’s common-man poetry, no missed opportunity to turn a simple song into a masterpiece through polish and performance.

There was more than a whiff of alt-country forebears like Whiskeytown and the Old 97s in the mix, but for the most part the Turnpike Troubadours were (and are) heavier on the “country” than the “alt.” The recording was state-of-the-art, courtesy of fellow Oklahoman Mike McClure, who was more than happy to go eclectic on his own records but played it fairly straight here. The lyrics were relatable, occasionally going out on a limb but usually settling for more down-to-earth impact, and Felker enunciated them like every word was worth hearing (they were). Guitar and fiddle duked it out for dominance, with touches of banjo and harmonica adding rustic textures when welcome. There’s not much here that Merle Haggard or George Strait wouldn’t recognize as their own beloved genre, but it’s also not self-consciously retro or stuck in the past: it’s more like the Troubadours imagined a better alternative universe where country music evolved into a modern era without any of the plasticky hick-hop mutations and off-putting pop sheen that got the mainstream to where it is now.

Take the opener, “Every Girl.” Casual misogyny gets kicked out of the window early: the girl of the band’s dreams is celebrated for her loyalty, taste, and intelligence, and how she looks in a pair of cutoff jeans never even comes up. The group’s musical talent holds its own sort of swagger, but the guy in “7 & 7” is a little surprised at his own capacity for bad-boy mystique. “I had no clue, I’d be the boy who/your mama warned you about,” Felker muses over a chugging beat, words that were probably written during a much-needed emotional break between the achingly vulnerable title track and the similarly melancholy “Evangeline.” “The sweetest violin could never whine/A melody as sorrowful as mine …” the song intones, with fiddler Kyle Nix doing his damnedest to prove him wrong. An almost worshipful vein runs through the upbeat “Down on Washington” and “Kansas City Southern” and the darker, more rock-edged “Whole Damn Town” (as in “this whole damn town’s in love with you”): you’d get the feeling it’s a woman’s world, and these heartbroke dudes are just doing what they can to hold their own. We are just fools, and we have loved you all along.

They aren’t totally stuck on the subject. The rousing, dynamic “1968” might be the album’s most elliptical song, not an obvious ode to a JFK or an MLK Jr. but such spirits and their era are evoked all the same. There are insistently melodic stompers like “Long Hot Summer Day” and “Shreveport” following working-class guys through the nicely-sketched details of hard work and misadventure. At least one track, “The Funeral,” takes a stab at classic, detailed Southern short-story form and sticks the landing with the tale of a modern-day prodigal son minus the biblical repentance. This ne’er-do-well and his “burned-out Bettie Page” girlfriend just want to swipe an antique gun and haul ass before mama’s guilt trip kicks in.

Then again, pretty much every Turnpike Troubadours song has a story running through it. Sometimes the narratives are a little looser than others, and some of them have gotten a bit darker over the course of their more recent albums (2012’s Goodbye Normal Street and 2015’s self-titled effort), with some spikier sounds to match. At their best — which they rarely waver from — their music is cool and compelling, earnest and complex, traditional and progressive. They nailed it in 2010, and the buzz clearly has yet to wear off. As alluded to earlier, music isn’t necessarily a contest. But if it is, the Troubadours are winning. — MIKE ETHAN MESSICK