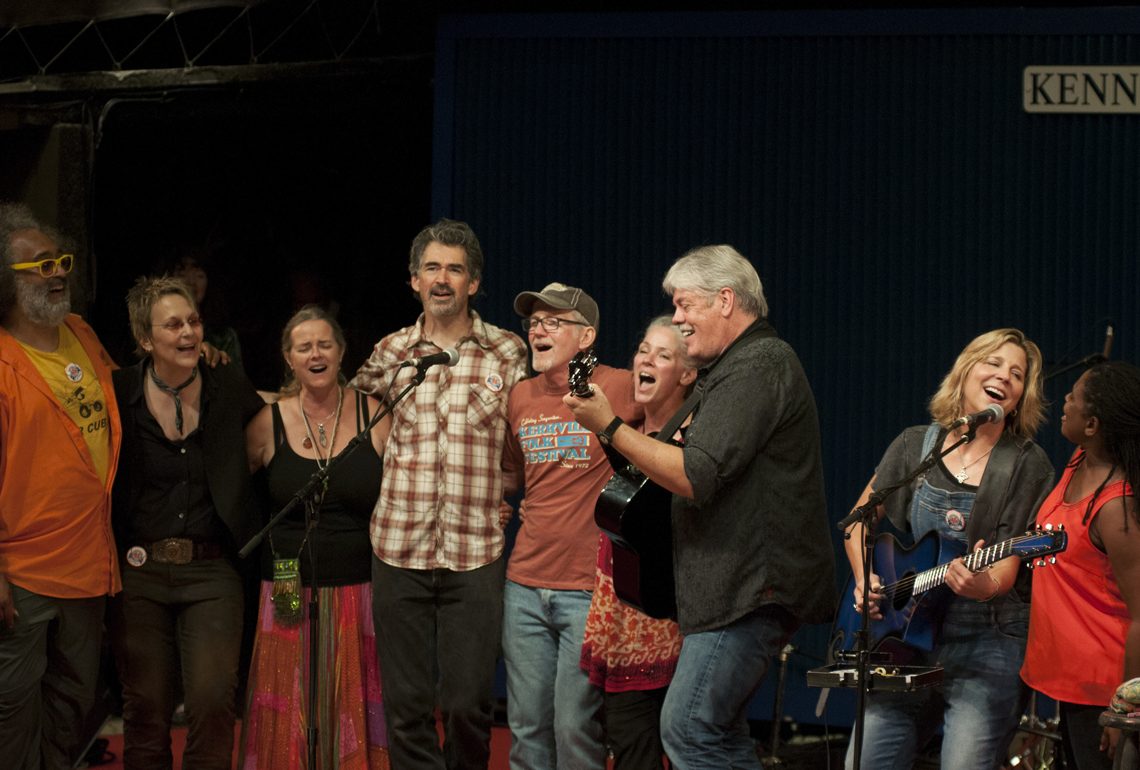 As any seasoned “Kerrvert” can tell you, there’s never really a question of will it rain at the Kerrville Folk Festival; it’s only a matter of when — and how hard. Because at the very least, there will be mud — and more than likely thunderstorms and lightning and tent-busting winds and sometimes flooding and even the occasional weather-cancelled headliner performance. Accepting this is just a fact of life during the 18 days in May and June when the festival comes into full bloom at Quiet Valley Ranch. But given Kerrverts’ tendency to be a huggy, resilient lot, you don’t have to wander the sprawling campgrounds of this city of song (once perfectly likened by Butch Hancock to the mystical Brigadoon) for too long before finding those who welcome it all with open arms.

“Some people want to leave when it starts to rain a little bit, but I’m going, ‘This is the best part!’” enthuses Brian Cutean, a sixty-something songwriter and onetime New Folk finalist from Oregon who’s been coming to Kerrville now for 36 years. “It happened last night with the storm: Laying my back on the ground, I could feel the rumble of the thunder underneath me. That’s what I come here for: the songs, the people, and the elements.” 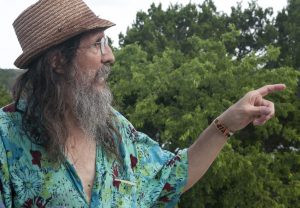 Oregon based songwriter Brian Cutean, who’s been a Kerrville regular since 1981. (Photo by Nichole Wagner)

The “elements” showed up early — and with gusto — this year for the festival’s 45th anniversary, which officially kicked off Thursday, May 26 with Kennedy Outdoor Theater “main stage” performances by Elizabeth Wills, Moore & McCumber, the Deer, Matt the Electrician, and Kerrville mainstay Jimmy LaFave. There were no cancellations, but LaFave’s headlining set was delayed for a spell due to a particularly excitable electrical storm. Friday evening’s lineup got a break, with David Jacobs-Strain, the Billy Jonas Band, Johnsmith, Randall Bramblett, and Carrie Rodriguez all getting to play, but the storms came back in force Saturday night. Del Barber and Kenny White both had to make due with abbreviated sets due to rain delays, and subsequent performances by Cheryl Wheeler, Brother Sun, and the Steel Wheels had to be cut altogether. And that was just a warmup for the pounding the campgrounds got overnight. While veteran storm lover Cutean danced merrily in the rain, “Kerrvirgins” like Brooklyn songwriter Aly Tadros — a Laredo native who was attending her first Kerrville as one of this year’s 32 New Folk finalists — scrambled nervously for cover. 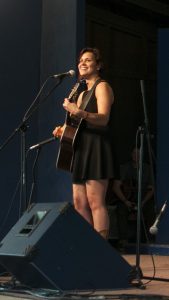 “I think most of last night was spent trying not to drown,” Tadros offered with a laugh Sunday afternoon after the second round of New Folk concerts at the Threadgill Theater. “The Rouses (of Rouse House Concerts fame) host all the New Folkers, so we’re camping together, and our song circle got rained out. I was wondering at what point we were supposed to start freaking out! But nobody did, so it ended up being OK — and kind of charming, really. I mean, how often do you get to camp out in rain like that?”

Still, festival producer Dalis Allen seemed more than a little relieved Sunday as she checked her phone for the forecast going into night four. “It doesn’t look like we have a whole lot of stuff in the area tonight, so we should be good,” she said hopefully, still bummed over Saturday’s cancellations. Having been a part of the Kerrville family from the get-go — she learned the ropes first hand from the late Rod Kennedy, the ex-Marine turned promoter who founded the festival in 1972 and ran the show up until his retirement in 2002 — Allen is used to dealing with all the curve balls Mother Nature can throw at a three-week long outdoor event. Just last year, people were kayaking through the campgrounds the night storms forced the cancellation of Emmylou Harris and Rodney Crowell (who later ended up playing an impromptu gig up the road at the YO Ranch Hotel in town). “This isn’t our first rodeo,” Allen says, then concedes with a laugh, “but I have to say that so far this year, it’s been a little much.” 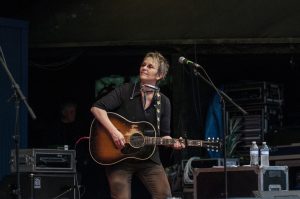 Mary Gauthier performing at Kerrville on Sunday, May 29. (Photo by Nichole Wagner)

But rain or shine, the people still come back to Kerrville, year after year. “And they come from all over the world,” marvels Cutean. “Scotland, England, Italy, Spain, Portugal, Mexico … there’s just so many people to meet. You could go sit in anyone’s camp and just put your feet up, and they’ll offer you a beer or coffee, maybe make you dinner, and share stories of their life and ask about yours. I’ve got friends here from North Carolina, East Texas, all over — and my songwriter friends here are some of the best on earth. They don’t have to be famous, they’re changing the world already: one song at a time, that’s what we say! Because when somebody plays you a song and you’re not prepared to hear it and it just busts you wide open, it can change your whole life. That’s why it’s a songwriter festival, right?” 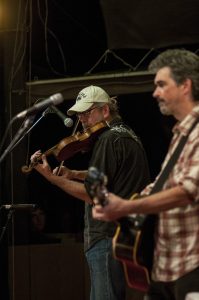 And it’s been that way going all the way back to its modest beginnings in ’72, when Kennedy, who’d already had some success as a club owner and concert promoter in Austin, was asked by the Texas Commission on the Arts and Humanities to pull together a music event to coincide with the Texas State Arts and Crafts Fair. The more famous folk acts he booked for the three-day event at the Kerrville Municipal Auditorium included Michael Murphey, Mance Lipscomb, and Carolyn Hester, but that same year’s inaugural New Folk competition also featured young up-and-comers the Flatlanders. In the years since, the festival has hosted countless legends from across the wide spectrum of folk, singer-songwriter, and Texas/Americana music — including many notables whose careers took off in earnest after earning distinction as a New Folk winner. This year’s six winners, as picked by judges Kenny White, Cheryl Wheeler, and Johnsmith and announced Sunday night after Mary Gauthier’s main stage performance, were Rachel Laven of San Antonio, Ben De La Cour of Nashville, Addie Brownlee of Brooklyn, Joe Shields of Alto, Michigan, Emily Scott Robinson of Chattanooga, Tennessee, and Justin Farren of Sacramento, California.

Slaid Cleaves, who also performed Sunday night, won New Folk back in 1992, not long after he’d moved down to Austin from Maine. He can still vividly remember the moment when his name was called out from the stage. “I was with the Maxie clan, these people who had invited me into their camp, the Seekers of the Shade — that was the family that taught me how to be a Texan, everything I needed to know,” he recalled fondly. “We’d been together for a week, all falling in love with each other and playing music for each other, and one of their clan was in New Folk. So we’re waiting for the winners to be announced, and when my name got called out there was just such joy in that little group of people. That was real special for me, getting to share in that moment with that new group of friends.” 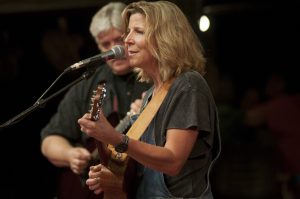 Terri Hendrix and Lloyd Maines, before being joined by “the tribe.” (Photo by Nichole Wagner)

Fellow Texas songwriter Terri Hendrix was never a New Folker, but she’s had many a joyful moment of her own over the 15 years she’s played the festival — most recently on Sunday night, when she closed her set by dedicating her song “Hole in My Pocket” to Kennedy, who died at age 84 on April 14, 2014. When she instinctively looked over to the VIP section where the beloved “RodFather” used to customarily watch every performance, Hendrix saw the evening’s first three performers Cleaves, Gauthier and Vance Gilbert — along with Johnsmith, Cyd Cassone and Kristin DeWitt — joining her and Lloyd Maines onstage in time for the first chorus. Then Ruthie Foster walked out from the other side of the stage and added her voice to the choir, too.

“That’s one for the ‘memory bank,’ indeed,” Hendrix said later. “I saw Johnsmith in the audience, and he’s sung with me on this song before — I love his voice so much. Then he saw Mary and Vance and called them out. I didn’t know! All of a sudden, I look over and there’s a tribe joining me. I will always cherish that moment. It made my heart happy. And most important, it made the crowd happy to see us all come together. I just happened to be the lucky one that it happened on my song.” 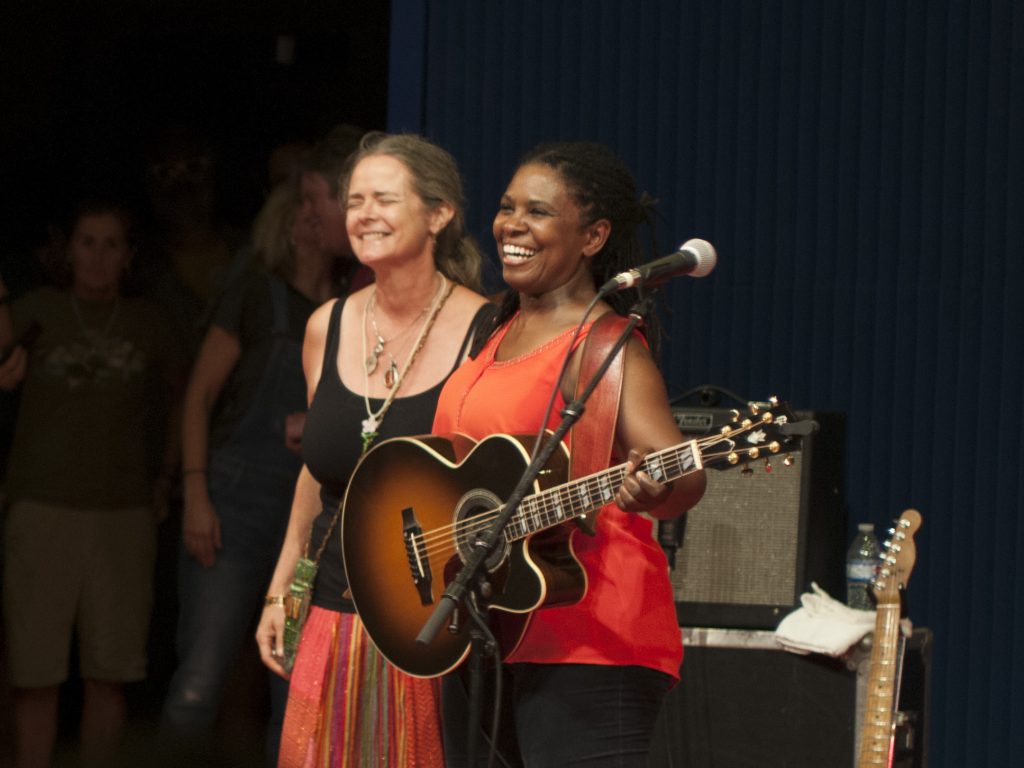 It wouldn’t be the evening’s last memorable come-together moment, though. Hendrix and Gilbert later joined Foster during her set for an exultant “Real Love,” which in turn was followed by a reunion of Foster and her old duo partner Cyd Cassone for a transcendently beautiful cover of  “Oh Suzanna.”

It was half-past midnight by the time they finished, but over on the far side of the ranch, the night was still young. Indeed, for many a diehard Kerrvert, that’s where — and when — a lot of the festival’s real magic happens. Walk the campgrounds for even half an hour, and you’ll hear everything from spirited, Cajun fiddle-fried covers of Lucinda Williams songs to intimate campfire performances by New Folkers and main stage artists like Grace Park of the Deer. In the dark or by torchlight, everyone with a song to share is an equal.

“I very seldom don’t get down to the main stage for at least a couple of acts, but I’ve also discovered over the years that there’s so much magic out here in the campgrounds that you don’t want to miss it,” said Roland Brown, a trial lawyer — and amateur songwriter himself — from Wimberley, Texas, who was attending his 25th Kerrville. “You see some really young people out here, they know three chords and they’ve written a song that’s got six words in it, but it’s a song. And great, great writers — people who get mailbox money — will encourage those people and listen to those people as though they’d written the greatest thing to ever come out of the ranch. I love that. And you can find a song circle all night long. The ‘curfew’ is sunrise.” 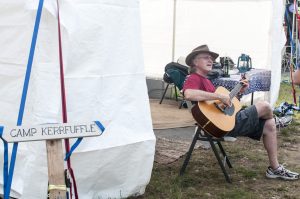