Camping Kerrville After the main stage goes dark, the party's just getting started 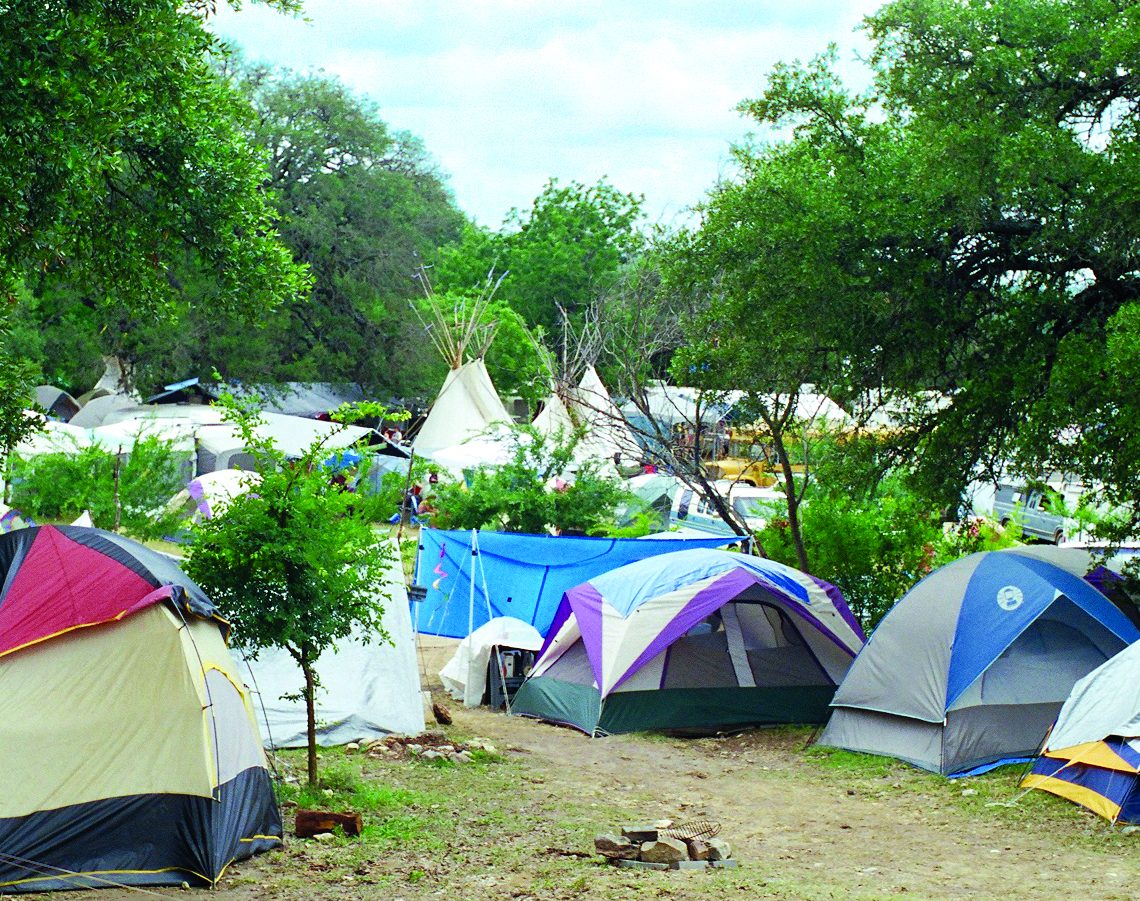 Talk to a couple dozen true blue Kerrverts, and it’s easy to come away with the impression you just haven’t really experienced the Kerrville Folk Festival until you’ve stumbled around from campfire to campfire, guitar in tow, until 5 in the morning every night for at least a good four-day weekend, and come to the conclusion that there’s no more luxurious bed in the world than the cold, rocky and frequently rain-soaked meadow of Quiet Valley Ranch. Then you wake up surrounded by at least a couple thousand other happy campers, and probably hug about half of them by the time you finally make it to the showers or, even better, down to the Medina River for a morning hippie dip.

Yeah, well, Ray Wylie Hubbard’s really not into all that. So even though he played the very first Kerrville Folk Festival 39 years ago, and probably at least another 20 or so since, go ahead and call him a Kerrvirgin, because Hubbard don’t camp. “I don’t do discomfort very well,” he deadpans. “My idea of roughing it is no ice cubes.”

So take it from the Wylie Lama: You don’t have to “rough it” or even necessarily stick around to “hang” to feel like part of (and be accepted into) the Kerrville family. But take it from, oh, 99 percent of the rest of Kerrville nation: don’t knock it till you’ve tried it.

“To me, that’s really what the festival’s about,” says songwriter Dana Cooper. “I love playing the main stage, of course, but I just love the whole democratic nature of the campfire scene. It was a real eye-opener for me. I’m always inspired by some of the emerging people you hear out there. They don’t have to win any contests or pass any muster; they just have to show up and be brave enough to share their songs with everybody.” 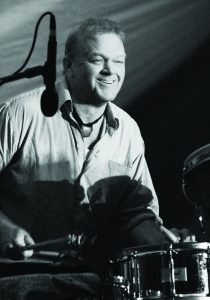 Austin musician, songwriter and producer Paul Pearcy, who has played drums and percussion on the main stage with everyone from Hubbard to the Lost Gonzo Band, Jimmie Dale Gilmore, Townes Van Zandt, Rusty Wier, Albert and Gage, Darden Smith, Walter Hyatt, Kelly Willis, Tom Russell and Terri Hendrix, calls the campfire scene “the great equalizer.” “If somebody has the balls and guts to get a guitar and sing a song they wrote from their heart, and they’re not a professional, that’s hard,” he says. “It takes a lot of gumption to do that. And even if those songs are not as refined or in tune or in time or whatever that you’re used to, it can be very moving. It’s kind of like everyone around the campfire’s sort of on the same page.”

Bob Livingston, another Lost Gonzo who, like Hubbard, played the very first Kerrville Folk Festival back in ’72 (with Michael Martin Murphey), explains the basic campfire song circle etiquette. “Some of the bigger camps might have like three circles, where the outer circle is people watching, and the middle circle is folks with guitars waiting to take their place in the inner circle where there’s 12 chairs around the fire,” he says. “And when you’re in that inner circle, you do a song and then you may not get to do another one for another 45 minutes — but if you just do your song and split, that’s considered uncouth, un-Kerrvilly. So unless you want to stay there all night you kind of have to time your exit. You’ll do a song and maybe stick around to do another song, and then make sure you listen to another few people before you somehow make it to where you become invisible and hope you haven’t offended anybody. But you really do hear the greatest stuff while you’re out there.”

Some folks are content to only stay for a night or two or for the weekend; others stick it out for the entire three weeks, year after year after year. Austin’s Bill Oliver, a 1979 New Folk winner, can trace his Kerrville camping days all the way back to the first two years, when the festival was still an indoors affair at the Kerrville Municipal Auditorium. “Before the ranch opened, we camped along the river downtown,” he says with a laugh. “It was rag-tag in those days. But I’ve camped out there pretty much ever since, except for a handful of years in the mid-80s. And a few years I’ve been out there almost the whole time.”

And then there’s 29-year-old Cheyanne Pearl, who really is what you might call a “lifer.” Her folks were serious Kerrverts, so she’s been camping out at Quiet Valley Ranch since she was 2-years-old. She grew up around the festival, working as a volunteer all through her teens and early 20s, and now works fulltime with producer Dalis Allen as the office manager. She actually lives on the ranch year round, and only recently upgraded from a nylon tent to a hard-shell camper. But she wouldn’t have it any other way. “Basically, I majored in camping in college — I got my bachelors in environmental ed,” she explains. “I’m a wilderness instructor by trade and a river guide, so living out here is definitely within my comfort zone.”

During the 18 days of the festival — when she’s not in the office — you’ll find Pearl hanging in “Camp Chupa Tequila,” the gang responsible for arguably “the biggest party that the ranch has ever seen,” the infamous “Chupacapalypse” bash a couple of years back. “We kind of got in a little trouble for that one,” she admits a little sheepishly. “But we always have big parties.”

Chupa Tequila is but one of dozens of distinct “camps” that you’ll find dotting the meadow and hillside during the festival; others include such notables as “Camp Nashville,” “Camp Cuisine” and even “Camp Stupid.” But first-timers needn’t fear about ever feeling out of the loop. “People are very welcoming towards new folks in camps,” Pearl says. “We all realize that there’s limited camping space and that it’s sort of luck of the draw whoever you end up camping next to, so whatever camp is nearby almost always ends up welcoming you and then all of a sudden you’re kind of officially a member.”

Wherever you find your spot, don’t count on getting too much sleep. Stereos, amplified music and drums of any sort are strictly forbidden on the campgrounds, but parties are everywhere (be they impromptu or planned, like “prom night”), good-natured pranks abound (Pearl recalls one year when the head of security’s entire camp site was carefully moved to the top of own of the bathrooms in the lower meadow) and songs are sung 24/7.

Roger Allen, a deejay on KGSR-FM in Austin, recalls the heyday of the “Campers From Hell,” his old gang of Kerrville “lunatics” that clustered together for years in the ’80s and ’90s (Allen and his wife, music publicist Cash Edwards, still regularly attend the evening concerts but now opt for the more tranquil serenity of the Y.O. Hotel downtown). “We all eventually moved on, but those years raged,” he says. “There were nights when Butch would start picking, and we’d have maybe 200-300 people around. And Butch would basically sing until everybody had passed out or gone to bed. He would literally stay up until the break of dawn, until everybody was gone. It was hilarious.”

Hancock laughs when asked if he was just being stubborn. “I think I was just having such a good time, I didn’t want to go to sleep,” he says. “I mean, who wanted to go to sleep? Sometimes you do just have to crash early, but other times, you just get started, and you take a notion to sing every song about trains you’ve ever heard. Or you get into other people’s songs, and then one thing leads to another. Or maybe somebody comes in with a new instrument, maybe a zither or a mandolin or a washtub bass, and that just rejuvenates the creative juices even more — musically, lyrically and as a human being in general. So if you feel like staying up all night, you’ve got it — no problem.”

The Campers From Hell may have moved on, but there’s no shortage of new pickers and songwriters and lunatics to take their place. “It’s definitely not like one of these festivals that’s dying out because it’s the same old codgers sitting around swapping stories,” observes Jimmy LaFave. “There’s a whole new generation of kids and musicians starting their own new thing down in the campgrounds, which I find to be pretty cool.”

But vestiges of the old guard still happily remain, too. Just ask Pearcy.

“I always camp down in the meadow, as opposed to the hill,” he says. “The new generation of kids, they call the meadow Florida — because that’s where all the old folks are! But you’ll still see the kids come down and check things out when you’ve got your campfire going full steam. And then they’ll go back up to their lofty perch on the hill on the rocks, and we’ll follow them to see what they’re doing.

“But it’s all good,” Pearcy laughs. “I’ve met a lot of friends out there, and I always look forward to seeing them every year. It’s one of those things where people go once and then they keep going back.”