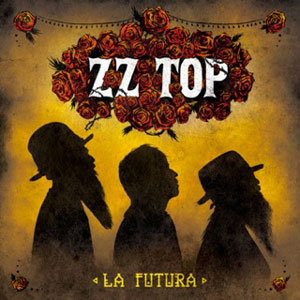 Let’s be honest: It’s been a little while since that little ole band from Texas really landed a solid wallop. Nevermind the fact that it’s been a good 20-plus years since their last fistful of chart hits (courtesy of 1990’s Recycler, released hot on the heels of the band’s cameo in that summer’s Back to the Future III); until now, ZZ Top had only released four albums since then, and the two that were better than average were all tease with no follow-up. 1996’s satisfyingly meaty Rhythmeen was followed by 1999’s utterly merit-free XXX, and 2003’s whacked-out but wildly entertaining Mescalero was followed by, well, nine long years of diddily squat. So really, despite producer Rick Rubin’s track record for coaching career turnarounds, who in their right mind could have ever expected Billy F Gibbons, Dusty Hill, and Frank Beard to not only roar back with a great record in 2012, but arguably one of the absolute best platters they’ve ever made?

La Futura clocks in at a lean and mean 39 minutes, 22 seconds, and never before has the band adhered so strictly to the “all killer, no filler” playbook. The record is a front-to-back monster, crammed full of greasy riffs, memorable hooks, wit, and genuine ah-shit thrills that hearken back to the Top’s heyday as kings of Texas-fried boogie ’n’ blues. What’s more, there’s hardly a synth in sight; in this Futura, it’s like the ’80s (and MTV) never happened, with the only Top in the rearview mirror being the kick-ass hombres singing about border radio and “Tush” circa 1975’s Fandango! Of course that would just smack of nostalgia if not for the fact that songs here are all so damn good — whether they’re hot-rodding and chop-shopping borrowed wheels (turning Houston rapper DJ DMD’s “25 Lighters” into “I Gotsta Get Paid” and slathering BBQ sauce all over Gillian Welch and David Rawlings’ “It’s Too Easy Mañana”), or one-upping their past glories with insanely catchy (but hefty) new rockers like “Chartreuse,” “Have a Little Mercy,” and “Flyin’ High.” The slower tunes are doozies, too; for “Over You” alone, we can just about forgive these guys for Afterburner’s icky “Rough Boy.” Will any or all of that return ZZ Top to the top of the charts? Doubtful. But who cares. The same goes for whether or not the band will make us wait another decade before making another record this good, or even ever make another record at all. All that matters is, this one is built to last. — RICHARD SKANSE

Previous post The Dirty River Boys: "The Science of Flight"