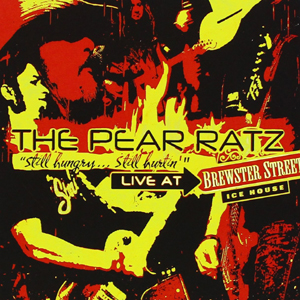 Pear Ratz fans, your cries have been heard. After three albums of thrash-metal-fortified honky-tonk, the high-octane band out of George West, Texas, has finally captured the full testicular fortitude of their live show on disc: “Still Hungry … Still Hurtin’”: Live at Brewster Street Ice House. The set list is impeccable, relentlessly rocking but with just enough melodic songs chucked in for you to catch your breath. For those with only cursory knowledge of the band, here’s what you’ll get: the Allman Bros Band and Waylon Jennings mixing it up at a party thrown by Motley Crüe — though the only cover here is Creedence Clearwater Revival’s “Green River.” The Pear Ratz marry their seemingly disparate influences into a sound wholly their own, and the result is especially hard to resist in a live setting. And Still Hungry, recorded in front of a suitably rabid crowd in Corpus Christi, is so live, so true to the moment, that you can practically feel the evening’s pouring rain that frontman Bob Strause acknowledges a few songs in. This party is wild as hell and soaking wet. If you like it loud, Still Hungry will hit the spot and have you coming back for more. — CODY OXLEY