The Dirty River Boys: “The Science of Flight” 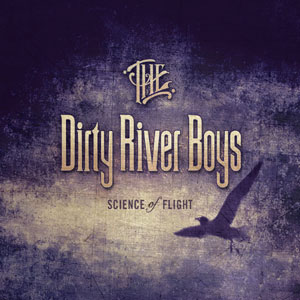 THE DIRTY RIVER BOYS
The Science of Flight
DRB Music

El Paso’s Dirty River Boys may hail from from a town that’s as far removed from the heart of the Texas music scene as you can get without crossing into New or Old Mexico, but you’d never know it from the amount of buzz they’ve generated over the last couple of years on the strength of constant touring and a pair of promising EPs (2010’s Long Cold Fall and 2011’s Train Station). As such, their debut full-length had a lot of hype to live up to, and The Science of Flight delivers with a diverse yet satisfyingly cohesive sampling of their engaging blend of tight harmonies and explosively energetic acoustic instrumentation. As is the case with many bands that hone their skills on stages rather than in studios, this album is best enjoyed after hearing the Dirty River Boys live, like a souvenir keepsake. But even if you’ve yet to experience the quartet in person — or if it’s been a while — there’s plenty here to get you sufficiently pumped up for their next stop at a bar, club or festival near you. In the wake of the Avett Brothers, the DRB aren’t the only young band of late to mix up an intoxicating brew of country, punk, and roots-rock, but songs like “Medicine Show,” “Raise Some Hell,” and “Lookin’ for the Heart” prove they can easily keep up with the best of them. As in their live-set, Nino Cooper, Marco Gutierrez, Travis Stearns, and Colton James swap turns at the mic and switch up tempos on a dime, but trying to keep up with them is half the fun. They’re just as impressive when they settle down, too, as proved by the stunning, Guy Clark-ian serenity of the sparse title track. Even when doing very little, it seems like these Boys can do it all. — KELLY DEARMORE