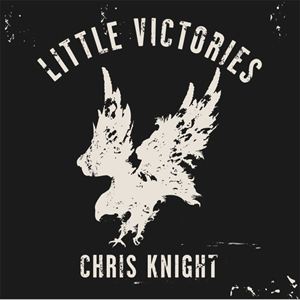 Chris Knight has little need for musical experimentation. His grizzled blend of rural poetry and folk-inflected roadhouse rock is as foolproof as a time-tested family moonshine recipe, so why mess with a winning formula? On the Ray Kennedy-produced Little Victories, Knight’s official follow-up to 2008’s Heart of Stone, the Kentucky troubadour offers up another 11 sterling cuts of prime Americana as fit for the front porch as they are a for a rowdy biker bar, all of which should connect just fine with fans who have followed him since his 1998 self-titled debut. But while there’s little to signal any sort of departure here sonically, the finely wrought lyrics reveal a subtle but unmistakable political consciousness that’s rather new ground for Knight. Instead of proselytizing, though, he simply offers an eyes-wide-open look at the impact of the current economy — specifically in his own backyard — and comments on what makes life worth living and the struggles that require relief. Songs such as “In the Meantime” and “Nothing On Me” find him empathizing with the fears, pride, and plight of Middle America and deftly spinning them into compelling narratives without patronization. He finds room for optimism, too, most notably in the title track, in which the legendary John Prine joins him in a glass-half-full list of everyday blessings worth singing about — from a sack full of common groceries to having “a deer and a half in the freezer.” For Knight as well as for the characters that populate his songs, “little victories” in life are anything but small, because they are so very real. — KELLY DEARMORE

Next post The Dirty River Boys: "The Science of Flight"