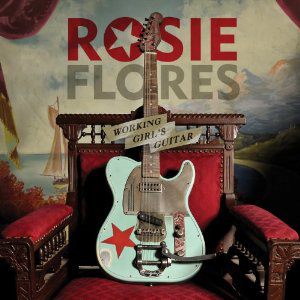 Rosie Flores steps into the producer’s chair for her 11th album, Working Girl’s Guitar, a solid effort that, true to its name, is another guitar-heavy outing that shows off the San Antonio-born rockabilly filly’s splendid — and varied — chops. “Little But I’m Loud” is a primal mid-tempo rocker with a snappy, sexy lyric and a spunky vocal supported by a couple of short, smokin’ solos, while “Yeah Yeah,” a touching song Flores wrote for her late friend and fellow songwriter Duane Jarvis, highlights the more lyrical side of her playing. “Surf Demon #5” is a twang-drenched instrumental that takes surf music into a smoky inner city bar with the help of Red Young’s big Hammond B3. Those are the only three songs Flores had a hand in writing on the record, but she shines just as brightly on the remaining half-dozen cover tunes. “Drugstore Rock and Roll,” by the late Janis Martin (whose recently released final album, The Blanco Sessions, was produced by Flores), shows Flores bringing a bluesy feel to a rockabilly standard. She also delivers “Too Much” with just enough gritty soul to make you forget all about Elvis’ version, and takes a delightfully unique approach to tackling George Harrison’s “While My Guitar Gently Weeps,” turning the Beatles classic into a gently swinging, late-night lament. — J. POET