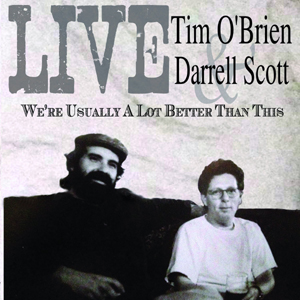 Longtime pals Darrell Scott and Tim O’Brien show off their chops on this ironically titled live album, concentrating on guitar, mandolin, and banjo. They deliver these 13 tunes, a combination of originals and covers of iconic classics (Lefty Frizzell, Hank Williams, Townes Van Zandt), with a loose-limbed panache that belies their often jaw dropping instrumental work. Scott’s guitar attack on Van Zandt’s “White Freightliner Blues” is as forceful as any rocker’s, with O’Brien’s mandolin solos a model of driving economy. O’Brien’s “Climbin’ Up a Mountain” is rowdy bluegrass at its best, while Scott’s “Long Time Gone” — a hit back in 2002 for the Dixie Chicks — is a nostalgic mid-tempo country number with O’Brien and Scott trading solos hot enough to make the crowd shriek with delight. They close with a medley of their Garth Brooks hit, “When There’s No One Around,” and a sanctified take of “Will the Circle Be Unbroken” that shows off their soul-stirring harmonies. — J. POET