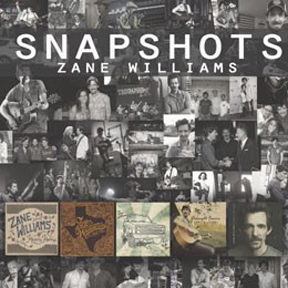 An erstwhile singer-songwriter who got a deserved boost during his tenure as one of the focus artists on the Troubadour TX TV show, Zane Williams hits an appealing balance between crowd-pleasing hookiness and subtle classic-country panache on his latest, Snapshots. If he’s got a counterpart in mainstream country music, it’d be Brad Paisley; both men are better than most at picking a clever concept and sticking with it, and Williams’ engaging delivery of wordy anthems like “Hands of a Workin’ Man,” “99 Bottles” and the knowing music-biz saga “Overnight Success” make the specifics ring memorable and true. Properly wielded, though, his Radney Foster-esque voice is more than just pleasant, investing the redemption-minded barroom ballad “Wine Into Water” or the working-dad lament “While I Was Away” with the sort of broken-hearted gravity they deserve. The insistent bar-band swing of “Damned” and the rueful “Little Too Late” make a case for Williams as a hard-country maestro in the making, but elsewhere he’s willing to meet the modern Top 40 more than halfway — the breezy “Ride With Me,” the aforementioned “Hands of a Workin’ Man” — without drifting into pandering bro-country territory (although the soft-rock cuteness of “She Is” doesn’t transcend its “for ladies only” vibe). It probably wouldn’t have hurt Williams to leaven his versatility with some brevity — 16 tracks could be more than the average listener is willing to chew, and so many of them feel like anthems (or at least singles) that even a budding fan might wish he’d saved a few for the next round.  Then again, there’s more than enough good stuff going on here to make the next round worth anticipating. — MIKE ETHAN MESSICK