Javier Escovedo: “Kicked Out of Eden” 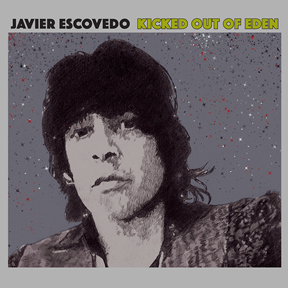 It’s probably just a coincidence/happy accident that Javier Escovedo’s Kicked Out of Eden clocks in at exactly the same length as his 2012 solo debut, City Lights: 30 minutes and 22 seconds. But it also feels just right, because half an hour and a fistful of seconds is really all the time Escovedo ever needs to make a hell of an impression. Chalk it up to experience. His first band, California’s the Zeros, made their mark as one of the West Coast’s first punk bands on record, but kickass 45s like 1977’s “Wimp”/“Don’t Push Me Around” were all that the Zeros released in their ’70s heyday (at least until reuniting more than a decade down the line to record 1994’s Knocking Me Dead.) The ’80s found Escovedo back in his native Texas (and touring nationwide) torching club stages in the True Believers, a band that did manage to record a pair of full-length albums in their prime (even though only one was released at the time). But both live and on record, with “the Troobs,” Javier had to share the frontman spotlight with his older brother Alejandro — and sometimes with third guitarist/singer Jon Dee Graham, too. Point being, when your limited time at the mic comes up in that batting order — or when every song you record (7-inch “B-sides” included) counts — you don’t fuck around with anything less than your A game.

It should come as no surprise, then, that Escovedo brings the same do-or-die intensity to Kicked Out of Eden, blasting through his short set with the full-tilt urgency of a brash young contender seizing the moment like it’s all he’s got, because those stakes are all this 50-something “Gypsy Son” has ever known; his 15 years of sobriety notwithstanding, some 40-year-old punk-rock habits die hard. The rollicking “Downtown” opens the record with a righteously joyous bang, like a rusty metal trash bin full of New York Dolls decadence hurled through a storefront window. “It Ain’t Easy” chases it with a confident (if suitably woozy) swagger through Exile on Main Street, clearing a path for the panther prowl and seedy groove of “Beaujolais.” After that, the middle of the record does slow down a little, with Escovedo and the rest of the band (anchored by guitarist Brad Rice, bassist Michael “Cornbread” Traylor, and drummer Hector Munoz, along with piano player Matt Hubbard, guitarist Eric Hisaw, singer Chrissy “New Mystery Girl” Flatt, drummer Jake Najor, and bassist Thomas Kitsos) easing off the pedal long enough to burnish some disarmingly lovely melodies on a few songs (the standout being the jangling, Byrdsy “Just Like All the Rest”). But it’s the next to the last track, “Gypsy Son,” that beats all. Although the song first surfaced (under the spelling “Gipsy Son”) on the True Believers’ 2013 reunion EP Dedication, the new recording here absolutely smokes the original. To be clear, it’s not that Javier and the rest of the Troobs missed the mark the first time around; but give this Escovedo a rare second chance to make a first impression with the best song he’s ever written, and damned if the gloves don’t really come off. — RICHARD SKANSE