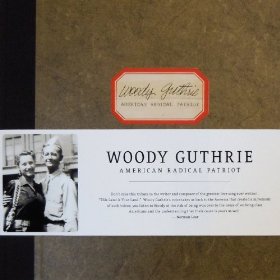 As prolific as he was during his short life, Woodrow Wilson Guthrie has released far more recorded and printed material from the grave than he ever did while he restlessly walked the earth. In addition to his only novel, the compelling House of Earth, edited by Texan Douglas Brinkley and the first title on Johnny Depp’s Harper Perennial imprint, Infinitum Nihil, 2013 also brings forth American Radical Patriot, an exhaustive labor of love produced by Rounder Records co-founder Bill Nowlin.

The box set — actually, more like a photo album — has six CDs, a documentary DVD, and a 78-rpm vinyl record, plus a 60-page edition of Nowlin’s downloadable 258-page book (included as a PDF on the first CD). It’s a ton of material — and it’s only Guthrie’s government recordings: the interviews Alan Lomax conducted with the folk singer for the Library of Congress, along with two-thirds of the 26 songs he wrote in 30 days for the Bonneville Power Administration and his pro-union and anti-venereal disease promotions for the war effort. This comes in addition to the flurry of releases delivered during the 2012 centennial of Guthrie’s birth. And yet, each one still manages to offer new revelations about a man whose confounding, complex personality continues to fascinate as much as his songs continue to resonate. That such a rich legacy was built from the simple act of writing and singing makes it that much more of an achievement. The fact that it was all done in a mere 10-year span elevates Guthrie’s output to the near-surreal.

American Radical Patriot carries us from his tragedy-filled childhood through the dustbowl and devastating Depression to the war that put the nation’s populace back on its feet — or some of it, anyway. Throughout this collection, we never lose sight of Guthrie’s main mission: giving voice to the common man, including those who could barely even see the lowest rungs of America’s socio-economic ladder. For the first time, we get to hear all five hours of Lomax’s interviews; digging like an anthropologist, he pried forth stories of Woody’s life and times — and the songs they inspired — that still contain a startling immediacy. The other material captures the wonder Guthrie felt upon viewing the Pacific Northwest and the massive dam-building project he was hired to document in song, and the mix of humor and seriousness with which he tackled the growing public health issue of venereal disease. All of it helps to clarify the question Nowlin poses: “Woody Guthrie: communist or ‘commonist’?”

This collection is hardly a mere historical document. The fact that so much of what Guthrie railed against is still going on as we busily repeat our past mistakes makes it sound like a review of current events. It’s a good thing Guthrie can still sing out a warning from beyond, and inspired so many disciples to carry his tune. — LYNNE MARGOLIS

Next post Grant Ewing: "The Buzz of a City Night"