Willie Nelson: “To All the Girls …” 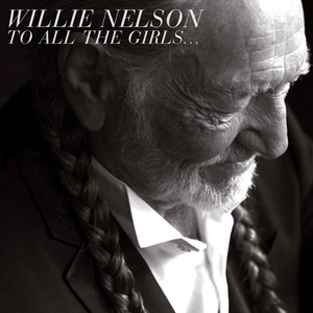 WILLIE NELSON
To All the Girls …
Legacy

Willie Nelson loves his duets and loves the ladies. But as with many of his collaborations, the results on his latest, To All the Girls …, are a very mixed bag. The most satisfying surprise among the 18 tracks here is the meditative reading of the John Fogerty classic, “Have You Ever Seen the Rain,” in which Willie’s daughter Paula delivers her verses and counterpoints her father on the choruses with skillful aplomb. That highlight is matched in quality and musical interest by the bluesy embers of “Grandma’s Hands,” with Mavis Staples, as well as the spritely honky-tonk of “After the Fire is Gone,” on which Tina Rose (Leon Russell’s daughter) stirs Willie’s singing with her sexy strut. The Texicali lilt of “No Mas Amor” is another keeper, thanks to Alison Krauss’ soaring, multi-tracked vocals, and the duets with Rosanne Cash, Emmylou Harris, and Norah Jones are all predictably good. But there’s also a handful of just not-very-special numbers with very special talents like Dolly Parton, Miranda Lambert, and Loretta Lynn, proving that chemistry is not always a given even when the pairings sound good in theory. Throw in some real duds, like the nervously antic version of “Bloody Mary Morning” with a hammy Wynonna, along with such soapy mediocrities as “Always on My Mind” with Carrie Underwood and “Far Away Places” with Sheryl Crow, and you’re left with a collection best cherry picked with caution rather than swallowed whole. To All the Girls … is a reminder that, just because Willie seems game for singing with just about anybody (and at this point in his career, pretty much has), he could stand to be a little more choosy. — ROB PATTERSON