Willie Nelson: “For the Good Times: A Tribute to Ray Price” 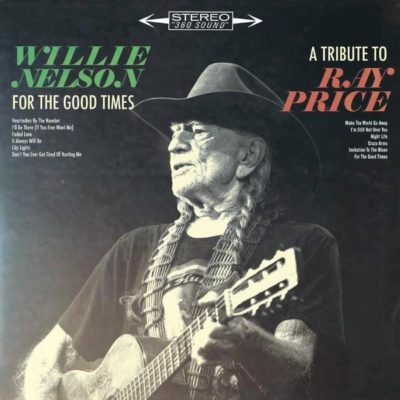 WILLIE NELSON
For the Good Times: A Tribute to Ray Price
Legacy

Willie Nelson’s prodigious recording output — 60 or so albums just since 1975’s Red Headed Stranger put him on the pop-culture map — has been frustratingly scattershot, alternating organic, incandescent soulfulness with perfunctory wheel-spinning. For the Good Times: A Tribute to Ray Price offers a little of both.

While one might expect the personal nature of the project — with Willie covering a dozen songs originated by his friend and mentor Ray Price, who died in December 2013 — to motivate Nelson to get focused, For the Good Times is a mixed bag of heartfelt performances and careless, tossed-off renditions that only hint at Nelson’s sublime interpretive skills.

Willie certainly chose the right collaborators for For the Good Times, including veteran producer Fred Foster and noted arranger Bergen White, both of whom worked extensively with Price, and Vince Gill’s instrumental combo the Time Jumpers, who channel Price’s early honky-tonk style on six of the album’s 12 songs. On the other half, Nelson performs with lush orchestral accompaniment, echoing the countrypolitan sound that Price pursued in the 1960s.

Although the vintage arrangements are solid throughout, Nelson’s singing is less consistent. At 83, his iconic voice has grown more fragile and less precise, and his vocals regularly tread the line between affecting vulnerability and shaky disengagement. The opening track, “Heartaches by the Number,” would seem to be an ideal vehicle for him, yet his rushed, choppy phrasing does no favors for himself or the song. The same goes for his half-baked takes on “Invitation to the Blues” and “Make the World Go Away,” which sound more like casual run-throughs than full-bodied performances.

On the other hand, Willie sounds a good deal more assured on a playful “I’ll Be There (If You Ever Want Me),” and delivers heartfelt takes on the bittersweet ballads “Faded Love,” “It Always Will Be” and “I’m Still Not Over You,” as well as a gracefully jazzy reading of the landmark Nelson composition “Night Life,” which Price made a hit in 1962. Those tunes, along with the album-closing title track, effortlessly meditate on life, love and the passage of time, and honor Nelson’s massive talent and Price’s visionary genius. — SCOTT SCHINDER

Next post The Mavericks, live all night at the Moody