Q&A: Cody Braun of Reckless Kelly Talking "Sunset Motel," the songs that got away and the road ahead 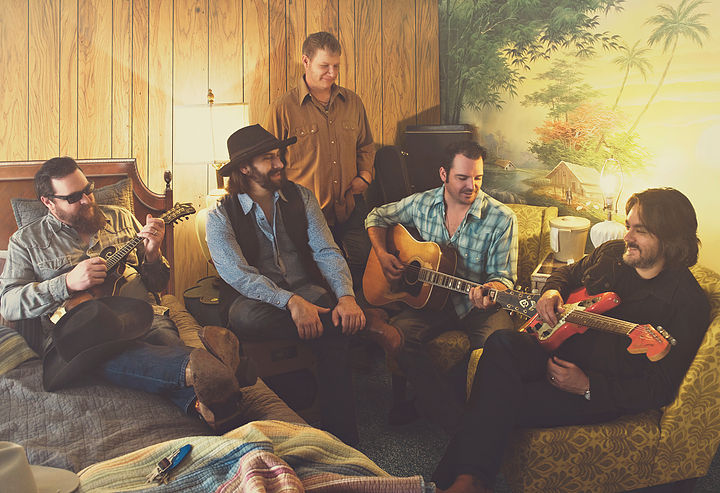 Steadfast talents, tireless tourers, and beloved brethren to the community of modern Texas music, the band Reckless Kelly are as central to the sound and attitude of their adopted home state’s music as anyone in their generation. Back when they were freshly transplanted from their Idaho home in the late ’90s, they brought a valuable rock ’n’ roll edge to the early days of the Texas/Red Dirt/alt-country revolution. Brothers Cody and Willy Braun (multi-instrumentalist and frontman, respectively) — literally the sons of cowboy country-folk artist Muzzie Braun and brothers to Micky and Gary Braun of fellow genre heroes Micky & the Motorcars — have become figurative family to dozens of fellow musicians in the scene they’ve helped define. They’ve also been among the genre’s more prolific bands, cultivating a catalog of tuneful, rough-around-the-edges country-rock with the latest batch hitting the shelves late last month. Sunset Motel is another victory for their immediately recognizable and hard-earned sound, and Cody Braun was kind enough to spend some time telling us about the making of this year’s model.

So tell us a little about the making of Sunset Motel. How good did it feel heading into the studio with another batch of new songs?

It was really great. We took it into Arlyn Studios here in Austin this time around, where we’d made our first record Millican almost 20 years ago. It was fun getting back in there with Lisa and Freddie Fletcher, they just make you feel right at home so we set up camp. Booked 10 days, ended up adding four or five because we didn’t want it to end, and ended up cutting 22 songs overall. We had friends in to play, took our time, had fun with it.

Did any of the tracks stand out to you as Reckless Kelly trying out something new?

Maybe not, really, aside from letting these new songs evolve naturally. Usually that happens in the rehearsal complex, but this time we pretty much let it happen in the studio. We were coming up with ideas and arrangements on the fly. That might not sound relaxing but it was.

Did anything jump out at you as a musician and multi-instrumentalist, kind of a “this is my finest moment on the record” epiphany?

[Laughs] Hard to say, except … well, there was this one where we brought Eleanor Whitmore in with her violin, then me on mine of course and we did some arranged string parts and that was really different for me, something I’d never done before. And on a couple of the rockers, “Radio” and “Moment in the Sun,” I played my Rickenbacker electric mandolin and just cranked it up as loud as it would go. And I just love singing harmony with my brother, and we made lots of room for that. Plus we cut a lot of tunes that didn’t make it on the record but we’ll use them somewhere down the road. One was called “The Girl from San Antone” and my buddy Jason Roberts came in to play twin fiddles with me. Unfortunately, it was maybe a little “too country” for the record we were making.

Was that kind of a consideration? Going into it thinking, “this is a little more of a rock ’n’ roll record”?

Not necessarily, this one was just so “two-steppy” and heavy on the twin fiddles that it didn’t quite fit with the rest of the tracks. Oh, another one that’s on the pile for the future, Rosie Flores came in and we did “Wild Horses.” Turned out Keith Gattis was in town too so he came over and we did a rock ’n’ roll guitar jam on it, turned out really nice.

“Wild Horses” as in the Rolling Stones song?

That’s the one! Yeah, people would pop by and we’d say “grab a guitar.” Good times.

Anything that you’re just itching to work into the live show?

I think people will really like “Buckaroo.” I pulled that one out of a pile of older stuff we’d wrote. We recorded it on an old demo once, Willy wrote it and we’d recorded it 10 years ago or so as sort of this country/spaghetti-western thing … [makes twangy noises] … I always heard it more rocked-up in my head, so I suggested let’s do this thing like Nirvana country. Go loud, go heavy. It’s about the rodeo cowboys and some girl breaking your heart but let’s do it with some rock ’n’ roll edge. I could imagine Chris LeDoux doing something like this, but it encompasses what we do, too.

And your band’s fingerprints, so to speak, are all over the music of Texas and the surrounding areas. You’ve influenced a lot of artists. Do you ever hear young bands that sort of return the favor and influence you with what they bring to the sound?

Well, we were influenced by the same kind of guys they were I think, Robert Earl Keen and Joe Ely and stuff like that. We borrowed what they’re borrowing from us now. I never hear anything and think “hey that’s exactly like us!” but if they get turned on to what we did, then that’s great. And I hear so many young players, you see them and think, “wow, what am I doing, why don’t I just quit?” [Laughs] “I’m never gonna be as good as that guy half my age!” But there’s a lot of good stuff; we’ve been listening to the Black Lilies and hanging out with them, and our good friends the Mastersons. And if you’re going even newer, I like Zane Williams. There’s so much cool stuff going on. It’s humbling and overwhelming how much stuff is out there, and how often I’m surprised by how good it is.

How much of a factor is radio nowadays, in terms of what songs you put on a record and how you produce them? There’s a few lyrical barbs in the song “Radio” off the new record, but even an alt-country act in 2016 can use a little air time.

Well, we’ve never really made records for radio, because we never fit in on country radio, and when we started out there wasn’t really such a thing as “Texas radio.” There wasn’t a chart, maybe a handful of Americana stations and some local stations playing Texas guys but it wasn’t an industry yet. So we’ve never really steered the ship in that direction; maybe the closest we ever got was around Wicked Twisted Road or Under the Table and Above the Sun, recording in Nashville with Ray Kennedy and somebody said “they’re gonna love this on [Austin adult-alternative station] KGSR!” But then we brought it home and Jody Denberg hated it and never played it. [Laughs] So I guess I’m glad we didn’t focus the whole record on that. Anyway, I think we kind of missed the window on the whole ‘90s country radio thing. When we started the band we were listening to a lot of Son Volt, and Shaver, and Steve Earle and thinking about how these guys were bucking the system and making their music. Whiskeytown, too. So we’re trying to do that ourselves, and then in the end of the ‘90s unfortunately the mainstream veers in the direction of country-rap instead of country-rock. But hey, at least our scene has evolved down here. Hundreds of radio stations supporting the music, playing Texas and Americana music from all over the country.

For some of these acts that are just getting started, what’s the best advice you can give them for keeping it going out on the road?

My dad always used to say, “Take two weeks off and then quit.” [Laughs] Yeah, you have to just really love it. If you get into it to get famous and make a lot of money you’re gonna be sorely disappointed. Find people you really enjoy working with, play at places you really like going back to, and when you find places you don’t like, don’t go back! Treat ‘em the way you want to be treated, don’t burn too many bridges, try to have fun. We’ve been accused of having too much fun, but it’s not worth it otherwise.

Now that you’ve had a couple decades to think about it, what’s the most satisfying thing about being in this business?

For me, it’s just having been able to make a living doing something you love. I started this as a kid, literally, and looking back on 30-plus years of it I never had to borrow money from anybody, we’ve always been self-sufficient and had the work. I’m proud we could do it this long and still enjoy it, I’m proud of all these records, and in some ways I think we’re just now getting into our prime. The band is playing better than ever, the shows are fun and we’re playing with some great people and hitting our stride. I’m really looking forward to the next 10 or 15 years, honestly. Make it 20 if we can.

Next post Willie Nelson: "For the Good Times: A Tribute to Ray Price"