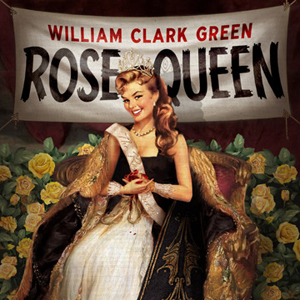 On the more radio-friendly end of modern Texas country music, there’s arguably not much payoff for taking radical risks; much like any other practical endeavor, from sports to accounting to architecture, it’s a game that’s played by certain rules and your bid for excellence is judged by what you can do within that space. But on only his third album, William Clark Green has filled that space with restless, poetic, and distinctive-feeling images and stories. It helps that there’s not too many notes his pliant, Ryan Adams-esque voice can’t hit, and his band can chug electrifyingly through modified Tex-Mex stomps (“Dead Or In Jail”), bluegrass-tinged love notes (“Let’s Go”), and standard-but-welcome Americana rockers (“Remedy,” “Drowning”) without ever sounding out of their depth. Rose Queen‘s title track is arguably a minor stumble out of the gate, passionately delivered but saddled with a few clichés about fleeting high school romance; after that, though, it’s pretty much a wall-to-wall triumph, and in his own subtly smart way Green’s got something new to say about every familiar theme he tackles. Don’t let titles like “She Likes the Beatles” or “Welcome to the Family” throw you, either: the former’s a swirling, smart-assed celebration of an unconventional romance and the latter’s a tender, detailed rendering of a family beset by trouble but bound by love. No doubt he’ll do right by both the girl and the family, just like he’s done right by his own talents here. — MIKE ETHAN MESSICK

Next post The Beaumonts: "Where Do You Want It?"