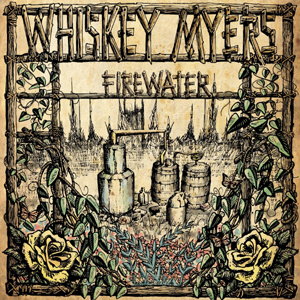 Shout out a request for “Freebird” at a Whiskey Myers show, and chances are the Tyler, Texas-based quintet will not only oblige, but slam that bird down your throat so hard, you’ll be sprouting feathers out your backside. In other words, damn straight, these boys sound like Skynyrd — along with equal doses Molly Hatchet, the Black Crowes and every other band of denim-loving longhairs to ever swagger out of the deep South with snarling guitars and a slamming rhythm section. “I still fly that Southern flag,” frontman Cody Cannon declares with plaintive pride on “Ballad of a Southern Man,” which verse-for-verse is as earnest a display of conservative values as anything this side of a Lee Greenwood concert. Cannon seems well aware that such sentiments might alienate some (“I guess that’s something you don’t understand,” he offers with a dismissive shrug), but ultimately the only message that really matters on Firewater, the band’s hard-charging second album, is spelled out in a later song: “Turn It Up.” There may not be much in the way of pure innovation here, at least not to anyone who knows their way around the classic rock radio dial; but when guitarist Cody Tate goes for the jugular and the rest of the band follows vicious suit — most notably, on the opening one-two punch of “Bar, Guitar and a Honky Tonk Crowd” and “Guitar Picker” — resistance is futile. — RICHARD SKANSE