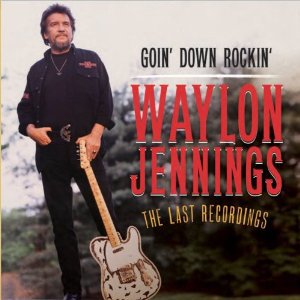 Unlike most posthumous collections of studio-enhanced tracks by departed artists, Goin’ Down Rockin’ honors and enhances the memory of the artist in question, rather than merely exploiting it. Consisting of tracks that Waylon Jennings cut with producer/pedal steel player Robby Turner prior to his death in 2002, and subsequently fleshed out by Turner and various Jennings sidemen, it finds Jennings sounding worn but not weary, and consistently impassioned despite his declining health. The 12 self-penned tunes — eight never-before-heard songs, plus four remakes of previously released numbers — find Jennings alternately reflective and defiant, and singing in a voice that occasionally sounds weakened yet never less than deeply engaged. Highlights include the title track, an appropriately unapologetic collaboration with fellow iconoclast Tony Joe White; “If My Harley was Runnin’,” a raucously touching riff on aging; and the thoughtful “Ways of the World,” which Turner outfits with an epic arrangement that’s out of character but oddly appropriate. The album’s emotional centerpiece is “I Do Believe,” a meditation on spirituality and mortality that’s startling in its wisdom and forthrightness. Goin’ Down Rockin’ isn’t quite essential Waylon. But it’s superior to any of the official albums that Jennings released during his last decade, and it demonstrates that he still had plenty to say when he left us at the age of 64. As such, it’s a worthy addition to his storied catalogue. — SCOTT SCHINDER