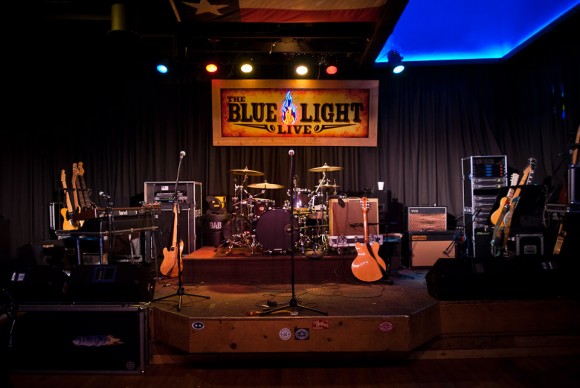 Fans of great original live music are traveling to the Hub City from all over Texas, Oklahoma, and New Mexico to see the shows at the Blue Light Live on Buddy Holly Avenue. And with good reason, too. With state-of-the-art sound equipment, brand new LED low-heat stage lights, and on-site recording and video production capabilities, the Blue Light Live is without a doubt a venue first and foremost, and not just a bar that books bands. There is a fully stocked bar, but there’s no kitchen and the only thing on the menu is live music served up right. All of the sound technicians are graduates of nearby Levelland’s South Plains College Music Program, considered one of the best schools in the nation for sound engineers, so fans and bands alike can rest assured that the music at the Blue Light Live is always going to sound spectacular.

A keystone in the burgeoning historic Depot Entertainment District, the Blue Light Live is located in one of downtown Lubbock’s oldest buildings, which was vacant for decades before the club opened in March 1999. There are rumors of friendly ghosts who prank the staff after hours. Owner operators David and Stephanie Brooks purchased the venue in 2005 from club founder Tom McDonald, who owns other Depot District properties. David, retired from a career in the military and law enforcement, had no familiarity with the music business when he and his wife bought the place, but it didn’t take long for it to become his passion.

“My heart and soul went out to these musicians,” Brooks says. “Almost immediately, it was apparent to us how dedicated they are to music and how hard they work, often for little reward. We are determined to treat musicians with respect, pay them well, and provide a great venue. For them to succeed, they have to be in the right place at the right time, and we want to provide an opportunity to these great artists we have in Lubbock.”

The Blue Light Live hosts live music six nights a week (it’s closed on Sundays). Cover charge is $3 Monday – Wednesday, $5 on Thursdays, and $8 to $20 on Fridays and Saturdays, depending on the regional or national acts performing. Regular guests include Ryan Bingham, Hayes Carll, Gary P. Nunn, and Billy Joe Shaver.

Monday is the Singer-Songwriter Showdown, when local artists can sign up to compete by performing two original songs. Two artists advance each week for a final round, and the following Tuesday, deejay Neely Yates plays a recording of that night’s performance on Lubbock’s 105.3 KJDL. More than 80 artists competed last year in the Showdown, and champion Casey Berry earned a performance at Larry Joe Taylor’s Texas Music Festival in Stephenville.

“The Blue Light is my home away from home because the regulars are loyal music fans who are there to listen to good music rather than get drunk and talk loud,” says Yates, who recently won a Texas Regional Radio & Music Association award for best medium-market air personality. (KJDL — “the Red Dirt Rebel” — won best medium-market radio station.)

Many successful musicians credit the Blue Light with nurturing their careers, including Josh Abbott, Wade Bowen and Randy Rogers. Cody Canada has told Brooks that he considers the Blue Light to be the starting place for Cross Canadian Ragweed, at least in Texas, as it was one of very few venues to support the band from the beginning. Now, newcomers like Charlie Shafter, William Clark Green, and Brandon Adams all cite the Blue Light as being a huge factor in their current rising popularity.

In some ways, the Blue Light Live is to today’s Lubbock music scene what Antone’s has long been to the scene in Austin: Not just a club, but a family of professional artists with a protective host and patron. Brooks humbly accepts the comparison as a great compliment. “When artists thank you for the support, that is reward enough,” he says. “Our business is music, and that is our life now.” Business is good, and the Brooks family is not missing any meals.

“I am proud of Lubbock and the great talent we have out here,” Brooks says. “I know we are off the beaten path, but one day we will receive due recognition for all the great original music that happens here every night.”