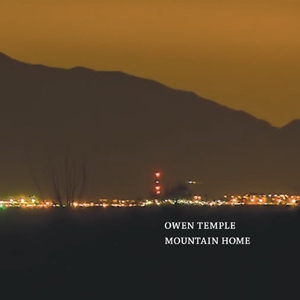 Texas is the kind of place where a town can be called “Mountain Home,” even though its elevation is a mere 1,909 feet — hardly the height of serious, snow-capped peaks. (Even though we like to think so, not everything’s bigger in Tejas.) That’s where Owen Temple grew up, on land as contradictory as its name: rocky, cedar-covered and dry — except when the flash floods come. And Temple’s songs seem to bear that same dichotomy, in a way. They’re inhabited by people trying to be something they’re not, passing through places that aren’t quite what they’d hoped. Some of these songs use geography like another character; “Desdemona” is set in the oil-boom town, but Temple imagines the woman who gave the place its name and sings about her. “Jacksboro Highway” is a seedy stretch where a lot of no good takes place, and “Small Town” … well, anyone who’s ever spent time in one knows exactly what this song’s about.

Many of Temple’s tunes sound like they were written for other people, and maybe they were; “Medicine Man,” for example, belongs in the hands of someone like Ray Wylie Hubbard. “Fall in Love Every Night,” a bittersweet bar-singer’s lament, could be more powerful with another performer’s passion behind it. But the two-time Kerrville Folk Festival New Folk Finalist (2007 and 2011) and 2007 B.W. Stephenson Songwriting Competition winner has some muscle at his back; players on the album include Charlie Sexton, Brian Standefer, Adam Carroll, Tommy Spurlock, Bukka Allen, Rick Richards and Gordy Quist, who lends a gentle R&B/gospel influence to the aforementioned “Medicine Man.” Mountain Home may not be an oil gusher of a disc; Temple’s own performance is decidedly understated. But there’s something bubbling under the surface, all right. Maybe it’s a rocky hill trying to become a mountain. If it could only break free. — LYNNE MARGOLIS