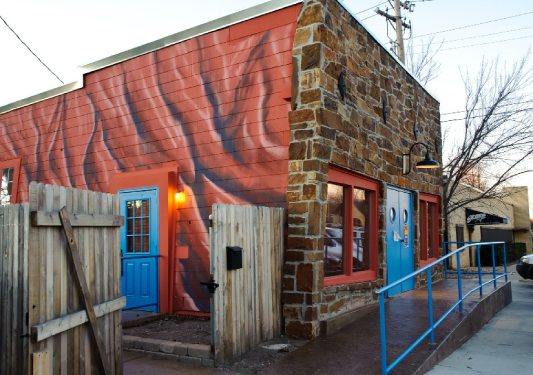 Outside the Blue Door (Photo by Vickie Farmer)

“Indian summer, Oklahoma sunset
If there’s a nicer place I haven’t been there yet
I’m standing outside the Blue Door
Too tired to sleep, too drunk for more.”
— “Bad Liver and a Broken Heart,” Scott Nolan

Tucked away on a side street near the campus of Oklahoma City University, the Blue Door is not a venue most folks would stumble upon by accident. Hell, there’s not even a sign out front.

“[Songwriter] Ellis Paul made me a sign,” Blue Door manager Greg Johnson explains, “but one of those Oklahoma wind storms knocked it off, and I never put it back up. It’s basically just look for the two blue doors, and there you are.”

The blue doors are about the flashiest things about the venue. There’s no bar, no dance floor, no neon lights. “It’s not a typical club,” Johnson explains. “You kind of leave the music business behind when you step inside the doors here.  That’s the way we like it.” 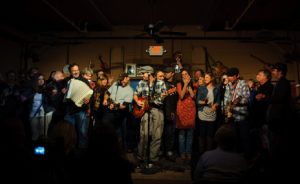 Inside the Blue Door (Photo by Vickie Farmer)

Like Austin’s Cactus Cafe, which served as Johnson’s model, the Blue Door is not a club, but a listening room. Three or four nights a week, musicians play to quiet but supportive audiences that don’t exceed more than about a hundred folks. “If you’ve written a new song, the Blue Door is the crowd you’re going to try it out on,” explains John Fullbright, who cut his teeth and recorded his first album at the venue. “They’re really listening intently, but they’re also on you’re side. Lucinda [Williams] said it best: it’s intimate, but not precious.”

While the vibe may be more pleasant than precious, the sound is undeniably pristine, supposedly because there are no right angles in the building. The crooked walls are papered with show posters of yesteryear, many of them signed “with love” to the Blue Door and Greg, and it is “with love” that the venue is run. “Greg is very passionate about the music, very caring about the artists,” says Michael Fracasso, “very nurturing.”

And it’s not just the artists he cares about. “What matters to me,” Johnson explains, “is these people who work hard all week and look forward to seeing Slaid Cleaves, Michael Fracasso, John Fullbright, or any number of people. It means a lot to their lives. That’s what we’re here for. We’re not here to show people how hip or cool we are. We’re here just for the music and the people who want to support this music.”

Johnson’s been supporting the music at the Blue Door for nearly 20 years, but he fell into the gig almost by accident. While living in Austin in the ’80s, he became an avid live music fan and befriended local songwriters, but he didn’t venture into the music business until 1991, when he presented the Southwest’s first Woody Guthrie tribute at a sold-out show at the Cactus Cafe (a tradition that continues at the Blue Door each December). In 1992, after Johnson moved back home to Oklahoma, musician Mary Reynolds told him about a funky little place known as the Hotel Bohemia, where she lived at the time, rehearsed her band, and had presented a couple of shows.  She suggested that Johnson could bring up some Austin songwriter friends for concerts. Johnson called Fracasso. “It was my first road gig,” Fracasso explains, and en route to that show, he pulled off and penned the song “Back to Oklahoma.” “My songs are never about one person, but Greg fits into that song. He’s that guy: ‘I’m going back to Oklahoma to see my ma and pa.’”

The rest, as they say, is history. In May of 1993, Reynolds moved back to Austin, Johnson moved into the back of the building, started calling it the Blue Door, and booked Kevin Welch, Ray Wylie Hubbard, Lucinda Williams, and Alejandro Escovedo, among others. Then, he explains, “the cool people from Nashville and the folk singers from the East Coast found out about us, and before I knew it, we’re in our 19th year, and I didn’t really plan this. I just said ‘well, I guess we’ll do another show.’ Now, for everybody who is in the singer-songwriter world, from folk to Americana, the Blue Door is a stop on their schedule.”

If you are any kind of live music fan, the Blue Door should be a stop on your schedule too.