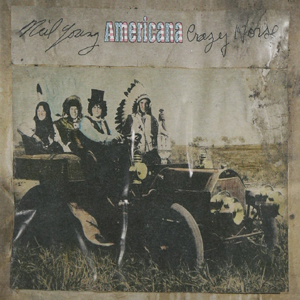 Though still a Canadian citizen, Neil Young has lived more years in the States than “up north” and has a stronger sense of American ideals than the average U.S. citizen (exhibit A: Farm Aid; exhibit B: “Ohio”). He also has a deep understanding of American history and the folk tradition, in which melodies were borrowed and lyrics altered to fit the situation as singers passed them around. All of which helps explain the rationale behind releasing an album full of beloved tunes such as “Oh Susannah,” “Clementine” and “This Land is Your Land,” and giving it this particular title — along with the ragged, fuzzed-out guitar, deep-throated bass and stomping rhythms that could only come from a Young/Crazy Horse incarnation. As these songs make clear, this gang could perform the phone book (if they could find one) and make it compelling listening.

Americana’s arrangements may carry Crazy Horse’s trademark looseness, but Young has meticulously researched each selection’s lineage, delving back centuries in some cases. His use of the childlike Americana Choir on some tracks evokes the generations of children raised on these songs — whether they knew these lyrics or not. Instead of the Kingston Trio-popularized “Tom Dooley,” for instance, he chooses the murder ballad’s original spelling and lyrics, with a new melody and arrangement harking back to his Squires days. “This Land” (featuring Young’s wife, Pegi, and Stephen Stills) takes its lyrics from Woody Guthrie’s original manuscript. But Young also throws in twists such as covering the ’50s hit “Get A Job” (shades of Sha Na Na!), infusing “Jesus’ Chariot (She’ll Be Comin’ ‘Round the Mountain)” with a forest-fire squall of guitar riffs and giving “Susannah’s” banjo “b-i-n-g-o”-like treatment. His nods to Guthrie, folk-rock pioneer Tim Rose and even Stills’ pre-Young days (via “High Flyin’ Bird”) reinforce the continuity between past and present that make this album’s concept so intriguing — and its messages just as vital today. — LYNNE MARGOLIS