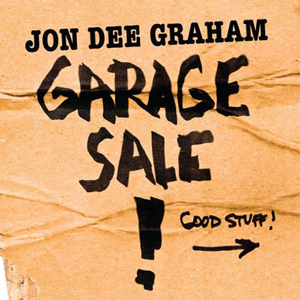 Ever since his outstanding 1997 solo debut, Escape from Monster Island, Jon Dee Graham has distinguished himself as one of Austin’s most reliably excellent singer-songwriters and hellaciously exciting guitarists. Though never heralded quite on the exalted level of his fellow former True Believers bandmate, Alejandro Escovedo, his own catalog and hair-raisingly great live performances are every bit as formidable, chock full of songs of ferocious honesty and harrowing beauty. His last outing, 2010’s It’s Not as Bad as It Looks, was especially riveting, as battered but resilient as Graham himself was after the wreck on the highway that sparked his title-worthy quip.

In light (or rather in the imposing shadow) of all that, Graham’s latest, Garage Sale, at first spin feels atypically well, lacking. But that’s just because it’s a grower, not a grabber. Comprised of 11 tracks recorded over a period of seven months utilizing a birthday gift of free studio time, this isn’t an album so much as a grab bag of stand-alone tunes and why-the-hell-not experiments. Given a little more time to germinate, some of these songs (“Unafraid,” “The Orphan’s Song,” “Just Like That”) might well have spawned enough of a vibe or theme around them to warrant a record with more of a statement to make, and the heartbreaking tale he sings in “Bobby Dunbar” will gut you. But Graham casually tosses them onto the same card table table here as such misfit oddities as the fit-for-a-luau instrumental “#19,” the two-minute, amp-frying caveman stomper “Where Were Yr Friends?” and, weirdest of all, “Radio Uxtmal (Venceremos),” which sounds like the theme to Sanford and Son chopped and screwed by a Spanish DJ from Mars. And therein lies the charm of Garage Sale. Nobody could ever mistake it for one of Graham’s greatest records; but as a make-me-an-offer-for-the-whole-lot box full of unset gems and lots of other random cool shit, it’s a steal of a deal. – RICHARD SKANSE