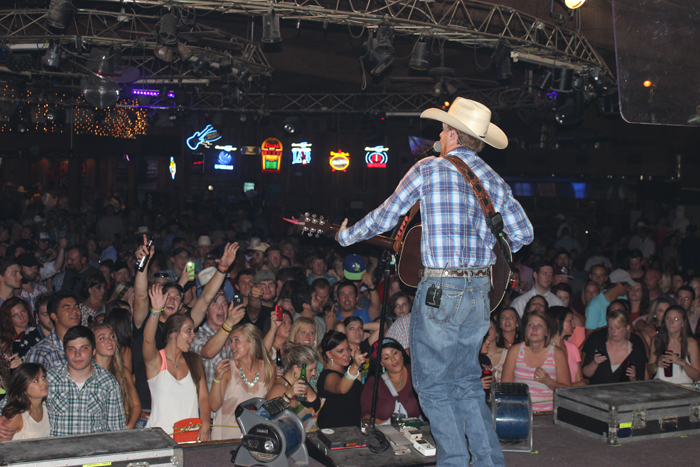 While the larger Metropolitan areas of Texas have always been honky-tonk hotbeds, there’s still neon-lit life outside of Dallas, Austin and Houston. And, not surprisingly, the hardwood palaces only accessible by driving down farm roads outside of the city limits are often the greatest finds these days. That’s because when new venues pop-up in crowded, trendy urban locales, such as East Austin or South Dallas, they’re often attempting to recreate the vibe and beer-stained authenticity of the venerable dancehalls that have long been a key element to the identity of Texas — the kind of real-deal authenticity you’ll find at the Southern Junction Nightclub & Steakhouse in Rockwall. Just look at the dress code on the club’s official website, and there’s proof-in-writing as to Southern Junction’s honky-tonk bona fides: “No spurs.”

Granted, the Southern Junction, located about 30 miles east of the Dallas skyline on I-30, hasn’t been around quite as long as some old-school dancehalls. But since 1985, it’s provided a pretense-free, community gathering place for patrons of all ages and a mix of national, regional and local talent. The expansive main room, which is lined with long tables framing the well-seasoned dance floor, brings everyone from Texas favorites like the Randy Rogers Band, the Cody Johnson Band and Robert Earl Keen to mainstream country touring acts like Restless Heart and Mark Chesnutt. But live music isn’t the only Texas appetite that the Southern Junction caters to: as the full name of this “Nightclub & Steakhouse” promises, its other specialty is serving up sizzling red meat. And if you’re really particular about how you like your steak cooked or consider yourself a grill master, you can even make it right there yourself. Prefer to leave the grilling of your choice cut to a professional? You can do that, too, for an extra two bucks.

Charles Houk, who became co-owner of the Southern Junction in 2008 and now handles daily operations, understands that the flexibility of his place is a key to its success. “My business partner is Paul Morelan, who bought Southern Junction in August 1987, and he really turned it into what it is today,” Houk says. “He installed the grills for people to cook their own steaks and created the culture of a family steakhouse starting at 6 p.m. that transforms throughout the evening into a true Texas honky-tonk by late evening.”

“Big” Gus Samuelson, a DJ for KHYI 95.3 The Range, has long been a regular at Southern Junction, as he often introduces the night’s featured artist. He’s also played there before with his own band, the Cajun-spiced country outfit Swampadelic, and one of his favorite memories of the times he’s spent there took place between his opening set and introducing an all-time country great. “A while back, we played in support of Marty Stuart,” Samuelson recalls. “When he came out onstage, he looked at me and said, ‘Oh, we’re in a real honky-tonk,’ and he promptly scrapped his normal, Nashville-esque set, and instead performed a free-for-all, burn-the-woodpile-down kind of set. It was simply amazing.”

Samuelson goes on to sum-up that, for a honky-tonk to be a great one, a few simple but crucial elements need to be in-place — all of which Southern Junction capably covers.

“That just proves that Southern Junction is about the true soul and spirit of a honky-tonk: smokin’, drinkin’, dancin’, and good country music,” he enthuses. “Plus, you get to have dinner with the family. It doesn’t get better than that.”