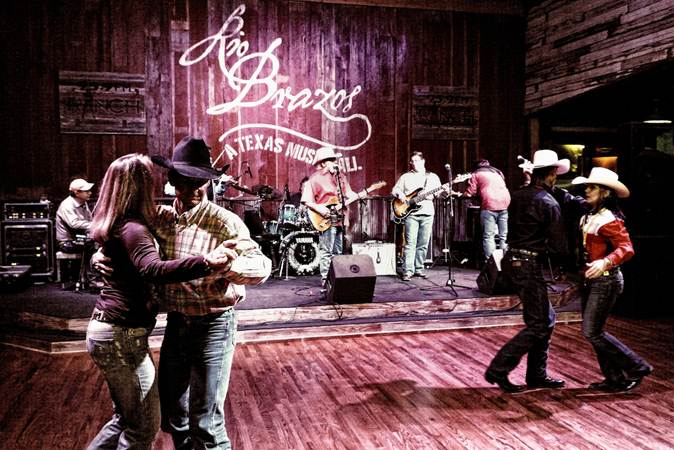 Rio Brazos Music Hall in Granbury was created by husband-and-wife team Jim and Tracy Hartman in loving homage to the traditional Texas dancehall. Chronicled by Pat Green in his book Dancehalls and Dreamers, and in songs by Jennings, Lovett, Keen and Creager, dancehalls have long been a cultural staple of Texas towns both small and large. In the middle of the last century, there were literally a thousand of them dotting the Lone Star State, although their numbers have dwindled. North Texas boasts several, including the Sons of Hermann Hall in Deep Ellum, and “the World’s Largest Honky-Tonk” (aka Billy Bob’s Texas) in Fort Worth. But the Hill Country is home to the largest concentration of dancehalls, including Luckenbach, Floore’s Country Store, and the Bandera Cabaret. About 300 miles north of Gruene Hall, the self-proclaimed oldest dancehall in Texas, and 50 miles from Billy Bob’s, Rio Brazos bills itself as Texas’ newest, oldest dancehall.

The Hartmans, who live two miles up the road from the club’s sprawling acreage, have been watching their community develop over the past few years. They had a sense that what was lacking wasn’t just a place to eat or drink. Granbury, Cresson and Highway 377 going back to Fort Worth are dotted with smaller bars and restaurants. However, there are very few family-friendly places where people can dance, eat, tell stories, and enjoy music, all at the same time. The Hartmans bought several tracts of land, making an “L” between busy Glen Rose Highway and state road 2425. 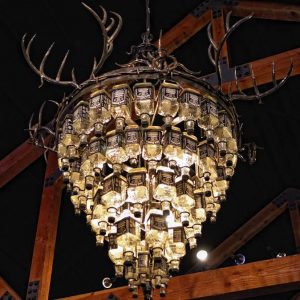 Rio Brazos is done up with old wood, floating guitars above the round bar, and a centerpiece-y chandelier made up of Jack Daniels bottles. It’s a funky mix of old-West and classic bar décor. Neon beer signs mix with deer and antelope heads, and several big-screen televisions flank the indoor stage, which has a capacity of 350 seated, or 500 packed back to back. The indoor area also features a decent-sized dance floor and a restaurant that excels at barbecue.

The Hartmans could have stopped with the indoor venue, but they looked at their acreage near the Brazos River, and considered both the advantages and flaws of a traditional dancehall in Texas. With a capacity of under 500, the indoor stage wouldn’t attract large name musicians. Expanding the place outside seemed logical. But venues that have their primary capacity outside, like Floore’s, swelter in the summer months and have limited capacity during the winter. So the Hartmans decided to try to beat the Texas weather with a winterized, fully enclosed tent area outdoors that seats 2,500. 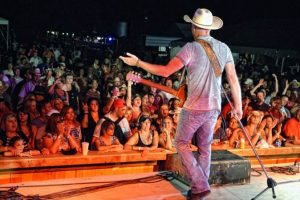 Rio Brazos also features an outdoor pasture area that can accommodate even larger crowds of up to 10,000, according to Tracy Hartman. She might be a little optimistic: Rio Brazos test drove the space Labor Day Weekend, when 2,000 people showed up to see Kevin Fowler and Cory Morrow, among others. Filling the indoor area and tent so far has been a little easier. Local and regional favorites like Tommy Alverson, Ray Wile Hubbard, Gary P. Nunn, Charlie Robison and Randy Rogers — along with national acts the Bellamy Brothers, Mark Chesnutt and Clint Black — all played both indoors and in the tent between October and December, while the venue’s official opening-day weekend celebration in early November featured Willie Nelson performing to a packed tent.

The Nelson show highlighted the fact that Rio Brazos has a little polishing up to do. Although parking was plentiful, bartenders, security guards and bathrooms were scarce. The Hartmans are going to need to step up to make the venue on par with longer-lived, larger scale dancehalls. But when the scene is a little smaller, Rio Brazos really does excel. Fort Worth singer-songwriter Jason Eady has played the acoustic indoor stage several times over the past three months. With his denim shirt, Converse sneakers, and two-day stubble, Eady looks like any other modern Texas musician. But his soulful, bluesy growl and Nelson and Haggard covers (along with fine gospel-tinged originals) belong in a classic dancehall. And that’s what the Hartmans aspire to — mixing the best of the old with the best of the new.

Next post Book Review: Brian T. Atkinson's "I'll Be Here in the Morning: The Songwriting Legacy of Townes Van Zandt"