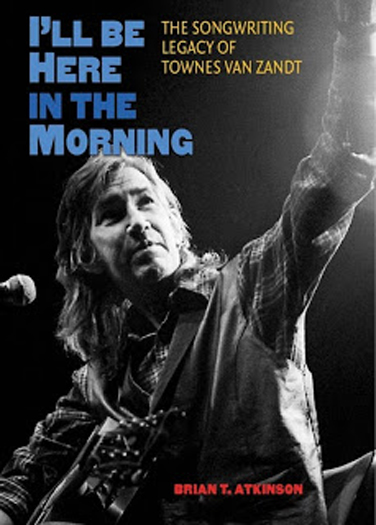 Fifteen years after he passed away on New Year’s Day of 1997, the late, great Townes Van Zandt remains as much of an underground, best-kept secret as he was when he was still walking the earth. Yes, that feels as ludicrous to write as it no doubt is to read, given how large his legend and influence looms over the Texas and Americana music landscapes; but step outside those circles, and you’ll likely find his name carries about as much household/mainstream recognition as, oh, Billy Joe Shaver or Guy Clark. That may not seem right, let alone fair, but don’t you take it too bad, because really, it’s OK. The man’s legend was born of songs, not fame, and as artist after artist testifies in I’ll Be Here in the Morning: The Songwriting Legacy of Townes Van Zandt, the songs he left behind endure and continue to inspire in ways both direct and indirect.

Writer Brian T. Atkinson, an Austin-based freelancer who has contributed to this magazine among many other outlets, first discovered Van Zandt via Steve Earle’s cover of “Tecumseh Valley” on his 1995 Train a Comin’ album. He’s been hooked ever since, and notes that the idea for his book was inspired by a performance of Van Zandt songs by another disciple, Hayes Carll. Unlike Earle, Carll never knew Van Zandt personally, but his connection and debt to the master was just as palpable. Those are the connections Atkinson explores in his book. Rather than attempting to write a straight biography of Van Zandt’s life (two have already been published in the last five years), he set out to compile an oral history of Van Zandt’s profound influence on other songwriters and artists, ranging from peers like Clark, Shaver and Rodney Crowell to younger artists like Carll, Jack Ingram, Kasey Chambers, Scott Avett, and Terri Hendrix, who either never got a chance to meet Van Zandt or only discovered his music after his death. Atkinson casts a wide net, too, looking beyond the immediate Americana music family to collect insights from the likes of My Morning Jacket’s Jim James, Adam Duritz of the Counting Crows, Jewel, Grace Potter, and Steve Turner, the Houston-born guitarist for Seattle grunge rockers Mudhoney.

Not surprisingly, the interviews with the artists who were closest to Van Zandt during his lifetime or who had the opportunity to tour, perform and raise hell with him, like Clark, Shaver, Crowell and Michael Timmins of the Cowboy Junkies (for whom Van Zandt wrote “Cowboy Junkies Lament” on his last album), are rich with anecdotes that provide colorful snapshots of his complex character: sweet, aloof, spiritual, earthly, funny, somber, stone-cold sober, or falling-asleep-onstage drunk. But truer to the book’s thesis, some of the most interesting perspectives are those that more closely examine the mysteries and wonders of his songcraft. It’s comforting to hear a songwriter of Todd Snider’s caliber candidly admit, “I like his words, I guess, just like everybody else, but I never usually knew what he was talking about.” Best of all is David Olney’s chapter, in which he not only recounts the visceral, life-changing impact hearing Van Zandt perform for the first time had on him (“Doors were opening in my mind, leading to new ways to think about songwriting,” he recalls), but breaks down songs like “Pancho and Lefty” and “For the Sake of the Song” line by line, marveling at the magic of every word. “Look at ‘Lefty split for Ohio,’” he says. “It’s one word: ‘split.’ Suddenly, it carries the song to a new time and place — from a splendid desert in the mythic past to a cheap Cleveland hotel in a tawdry present … I’d keep myself awake for hours with that.”

Granted, not all of all of the interviews here are quite that insightful: “I think some of the strongest singer-songwriters like Merle Haggard and Loretta Lynn and Townes Van Zandt come from the country genre,” offers Jewel — suggesting that Atkinson didn’t have the heart to leave out anyone he talked to regardless of how little they added to the conversation. More unfortunate — and Atkinson himself has expressed his regrets on this — is the absence of an Earle interview; his repeated attempts to reach out to the artist whose “Tecumseh Valley” cover introduced him to Van Zandt’s music in the first place just never panned out. But as the chorus of other esteemed voices here all make evident, the songwriting legacy of Townes Van Zandt is strong enough to carry on without him. You can go ahead and climb down off of Mr. Dylan’s coffee table, now, Steve. — RICHARD SKANSE

Next post This cake's for him: Guy Clark celebrates 70th b-day with all-star tribute