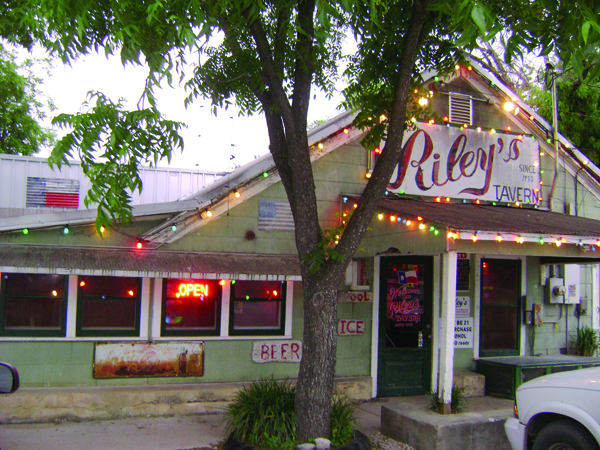 As can be said of many small towns, blink twice and you’ll miss it. Such is the case with the small town of Hunter, Texas, located just west of IH-35 halfway between San Marcos and New Braunfels. On any given evening, though, you can find folks from miles around gathered at their favorite watering hole, Riley’s Tavern. Riley’s is the perfect place to drop in for a beer after work. It’s also the perfect venue for live Texas music. 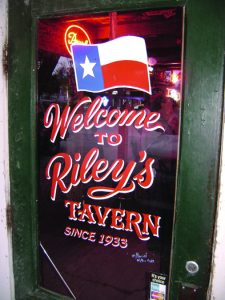 Riley’s Tavern is best known for being the first bar in Texas to open after the ratification of the 21st Amendment in 1933, ending Prohibition. The Prohibition Act, also known as the Volstead Act, passed through Congress under the 18th Amendment in 1919, despite a veto attempt by President Woodrow Wilson. Making the manufacture and sale of alcoholic beverages illegal, Prohibition was a very unpopular law, especially during the Great Depression.

President Franklin Roosevelt was in the White House when a 17-year-old entrepreneur named J.C. Riley traveled with his uncle from Hunter to Austin to obtain a license to sell beer. First in line at the steps of the capitol building, Riley obtained the very first post-Prohibition beer license in the State of Texas. He chose an old building near his home, previously known as the Galloway Saloon, as the location for his establishment. The old saloon had been a local gathering spot prior to Prohibition. The building was leased from its owner for $4 a month and was eventually sold for a whopping $700.

Centrally located between Austin and San Antonio, Hunter was a desirable location for stops for the International and Great Northern Railroad and the Missouri, Kansas and Texas Railroad (The Katy). York Creek, which runs through the tiny town, also added to the success of Hunter.

An addition was soon added to the old Galloway House and Riley’s Tavern was open for business. Riley operated the bar that still bears his name until 1991, an amazing 58 years. He passed away the following year. After Riley himself, the bar was then run by Rick and Donna Wilson until 2003 when it was purchased by its current owner, Joel Hofmann.

Hofmann, a lover of all things vintage, wanted to keep the old bar as original as possible. Many of the original signs still hang on the walls and the outside of the building is essentially unchanged. The creak of the 150-year-old hardwood floors is a welcome sound to visitors and regulars alike. With the exception of an addition built in 2006, very little has changed since Riley’s Tavern was first opened for business. The new addition sports pool tables, shuffleboard and pinball machines. There’s also a large outdoor beer garden with obligatory horseshoe pits and picnic tables. A musician himself (frontman of the Joel Hofmann Band), Hofmann is a major supporter of local talent and has showcased quite a few acts such as Two Tons of Steel, Weldon Henson, the Slow Rollin’ Lows, Wayne Hancock, Terri Hendrix, Heybale! and more.

Riley’s has a full bar and is open 7 nights a week, with live music every night except Mondays. The old J.C. Riley house can also be rented for overnight stays. Visit www.rileystavern.com for more information or just drop in. Ask for a Sammy’s Special at the bar and tell ’em Michael Shane sent ya.

Next post Mike Stinson: "The Jukebox in Your Heart"