Mike Stinson: “The Jukebox in Your Heart” 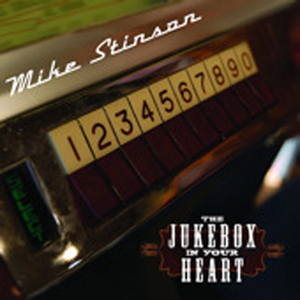 MIKE STINSON
The Jukebox in Your Heart
Stag Records

Outside of James Hand, Dale Watson and a small cadre of others, there are few artists on the scene today who sound like honky-tonk is what they truly live. As writers and singers go, Los Angeles transplant Mike Stinson (who moved to Houston last June) is the musical equivalent of a honky-tonk Charles Bukowski. Barroom anthems like “No One to Drink with Anymore,” “I Will Live to Drink Again” and “Last Fool at the Bar” stand up beside anything anyone is doing in the drinking song category these days. But it is with Ray Price-style lost-love weepers like “Slip My Mind” or his paean to Lucinda Williams, “Angel of the Evening,” that Stinson stakes his claim to greatness. When Stinson sings “when you see her stumble through the bar, if she should start to fall/please reach out to steady her, it’s just the alcohol,” it’s immediately apparent that he’s no trust-fund frat boy making an album on daddy’s dime, but rather the genuine coin of the honky-tonk realm. That’s why Stinson has a gold record hanging on his apartment wall for Dwight Yoakam’s cut of “Late Great Golden State.” Recorded in Austin with Jesse Dayton and his stellar band backing, The Jukebox in Your Heart is Stinson’s first Texas record but certainly not his last, and it signals to all comers that there’s a new candidate for sheriff in Honky-Tonk Town. — WILLIAM MICHAEL SMITH