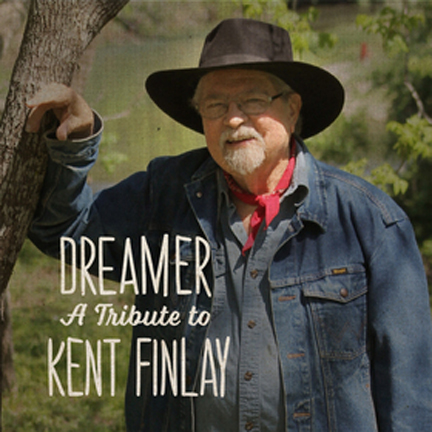 Although he was a prolific songwriter and no stranger to performing onstage, Kent Finlay never got around to releasing an album during his time on earth. But when he passed away at his home in Martindale last Texas Independence Day, the 77-year-old troubadour left behind a legacy of song as rich and profoundly influential as any of the hundreds of artists who ever strummed or sang a note inside his beloved Cheatham Street Warehouse. Many of those artists got their very start at the storied San Marcos honky-tonk, nurtured under Finlay’s wing from nervous newbies at his welcoming songwriter’s circles into wildly successful careers both mainstream (George Strait, Randy Rogers) and free-range proud (Terri Hendrix, Todd Snider). Fittingly, Dreamer, co-produced by Kent’s oldest daughter, Jenni Finlay, and Brian T. Atkinson (who also collaborated on the new oral history book, Kent Finlay, Dreamer: The Musical Legacy Behind Cheatham Street Warehouse), is as much a tribute to the man’s decades-long role as shepherd as it is to his own repertoire, with every artist on it sharing a personal connection to the both Finlay himself and his tin-roofed house of song.

Of course, not every notable Cheatham alumni is here (no Strait or Snider, for starters), but those who are present and accounted for do Finlay’s memory exceedingly proud. Terri Hendrix opens the record with “I’ll Sing You a Story,” a song as warm and friendly as Finlay was himself, welcoming regulars and first-timers alike from his favorite stool at the end of the bar. The inviting lyrics and relaxed, conversational rhythm of the melody fits Hendrix’s own signature voice to a T, though it’s hard not to hear Finlay singing right along with her in his equally distinctive raspy drawl: “As long as you’re listening, I’ll keep on pickin’ / I’ll sing you a story, I’ll tell you a song.” Walt Wilkins draws the second slot and does right by arguably Finlay’s finest song, “Bright Lights of Brady,” an exquisitely cut diamond of starry-eyed dreaming as filtered through the sweet naiveté of small-town innocence. James McMurtry, like Hendrix a graduate of Cheatham’s fabled “Class of ’87,” handles “Comfort’s Just a Rifle Shot Away” with an Old West-style gravitas worthy of Marty Robbins’ timeless Gunfighter Ballads and Trail Songs; ditto Owen Temple’s appropriately solemn take on “Mines of Terlingua.” Jon Dee Graham, whose old Austin punk band the Skunks frequented Cheatham in the early ’80s (proof that Kent’s love of songwriters transcended genre), growls his way with equal parts conviction and playfulness through “I’d Have Taken Better Care of Myself,” and Finlay’s younger daughter, HalleyAnna, wrings a lifetime’s worth of tender empathy out of every line in “I’ve Written Some Life”: “I once lived a song with a fun-loving friend / and all things were good, but good things all end / We joked and we laughed, shared 10,000 beers / but he died laughing, and I wrote the tears.”

Every song here feels perfectly matched with the right interpreter, and for the most part every selection serves to highlight a different facet of Finlay’s emotional range, from mature romantic laments (“Yesterday’s Oatmeal” by Brennen Leigh and Noel McKay, “Between You And Me” by Randy Rogers and Sunny Sweeney) to sage barstool philosopher (“Be Nice to ’Em, Son” by Adam Carroll, “The Songwriter” by Matt Harlan) to goofball favorite uncle (“The Plight of the Bumblebee” by Steve Poltz). The one notable exception is William Clark Green’s “Still Think About You,” a song Green co-wrote with Finlay and first released (as a different recording) on his 2015 album Ringling Road; it’s a very good WCG song, but one suspects Finlay’s input was minimal at best. Granted, that may have been the same case with Slaid Cleaves’ “Lost,” the only other co-write here, but that song feels far closer to Finlay’s own style and spirit. Regardless, a case can be made that Finlay’s gift for helping other writers fine tune their own songs was as much a part of what made Kent Kent as was his ubiquitous red bandana, his infamous “shushing” of loud patrons during songwriter night, and his tradition of closing every song pull with his best-known and best-loved song, “Hill Country.” According to Atkinson’s liner notes, they originally weren’t going to include that song on Dreamer, which would have been both inexplicable and inexcusable. Fortunately, common sense prevailed, and Jamie Lin Wilson — accompanied by dozens of friends and loved ones dubbed “The Hill Country Choir” — does the honor of bringing it all back home. And if you can’t hear Kent’s own spirit in the mix singing along on the chorus, shush and listen closer. — RICHARD SKANSE