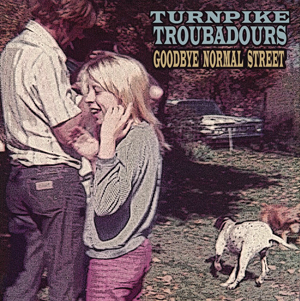 For the Turnpike Troubadours’ third album, Goodbye Normal Street, the Evan Felker-led band of Oklahomans has cemented its rightful spot in the vanguard of the current crop of rising Red Dirt talents. No, forget that: these guys are pretty much in a league of their own, with roots that go a whole lot deeper than those of most other twenty-something (or even thirty-something) bands on the Texas/Oklahoma music scene. Slick tales of floating rivers and simplistic professions of love are definitely not what Felker and fellow Troubadours R.C. Edwards, Kyle Nix, Ryan Engleman, and Gabriel Pearson, are really into. Just listen to the new album’s “Southeastern Son,” a prime example of how the Woody Guthrie-loving quintet uses its literate, old-school storytelling-style to proffer a freshly relevant tale: “The Army man told me that I could defend the free,” sings Felker, “and draw me a paycheck and get a tech-school degree.” And check the title of the duet with the Trisha’s Jamie Wilson, “Call a Spade a Spade,” an old-timer’s cliché that sounds sexy thanks to Wilson’s sultry drawl. Goodbye Normal Street is by no means an antiquated-sounding folk record or a somber collection of cumbersome acoustic balladry, but several songs do showcase an array of prominent roots-driven methods of propulsion. Sonic elements such as the gothic, Appalachian-style banjo and slithery fiddle of the album’s opener, “Gin, Smoke and Lies,” (which could easily be the theme song for television’s Justified), and “Before the Devil Knows We’re Dead,” which features some wild-ass fiddle fury, give the entire collection a thrillingly rustic edge. Continuing the use of fiddle to hammer home their musical message, “Blue Star” busts out of the gate with an entangled harmonica and fiddle weaving their way throughout. Felker and crew make a decisive, believable move to craft a time-honored yet compelling trademark sound. Perhaps the album should have been titled entitled, Hello, Big Time. — KELLY DEARMORE

Previous post Matt Harlan & The Sentimentals: "Bow and Be Simple"