Matt Harlan & The Sentimentals: “Bow and Be Simple” 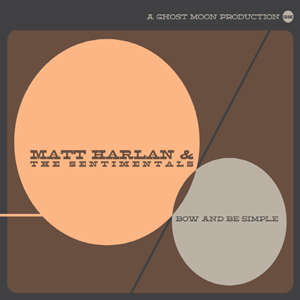 MATT HARLAN & THE SENTIMENTALS
Bow and Be Simple
Berkalin Records

There’s something distinctly American about the sort of dusty, country-tinged folk that Matt Harlan makes, even if this time he had to go all the way to Sweden with a band from Denmark to make it. Perhaps because of Houston-native Harlan’s Texas roots – or, just as likely, because of the fact that down-to-earth melodies and dirt-road sonics aren’t the sole property of Texans, or Americans – the result isn’t eaten up with Euro-exotica, just unfailingly warm strains of steel, harmonica, and remarkably restrained electric guitar adorning Harlan’s subtle acoustic vibe as he sings of winsome philosophies and rustic romance.  Boosted by time, confidence, and well-chosen collaboration (the frequent harmonies of Rachel Jones are among the invaluable assets here), Harlan shines brighter as a vocalist than on his worthy but even-more-subdued 2010 debut; if he occasionally gets mistaken for Walt Wilkins in range, tone, and timbre, he shouldn’t be surprised.  He also shouldn’t be surprised if the title song or the quietly harrowing “The Ring” prove to be among the most enduring folk tunes of the year.  And not just from Texas.  Or America. — MIKE ETHAN MESSICK