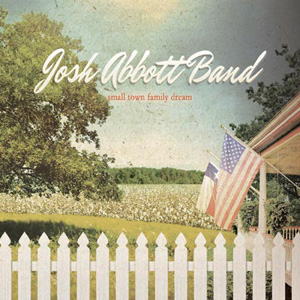 Small Town Family Dream, the first album from the Josh Abbott Band to feature cover songs, is a cohesive work that Abbott says is dedicated to the “common, hard-working people.” It’s a theme he touches on in the album closing title track, but it’s actually best epitomized in the three outside songs: the Terry Allen twofer of “FFA” and “Flatland Farmer” (both picked from his classic 1979 album Lubbock on Everything), and “I’ll Sing About Mine” by Adam Hood and Brian Keane (who have each recorded their own version of the song.) The rest of Small Town Family Dream features original songs covering love, a few more hard-working people, and of course, allegiance to Texas. If you listen to Texas country radio, no doubt you’ve already heard a couple of ’em: “Touch” (of course), and “My Texas” (which name-checks Pat Green and features Pat Green). Dig those? There are other songs you’ll like here, too — most notably the opening anthem, “Idalou,” in which Abbott salutes his very own small town in West Texas. On the more romantic side, “She Will Be Free” and “Dallas Love” will no doubt be shining belt buckles all over Texas. But if you’ve ever trashed your friends for listening to Toby Keith, then best skip “Hotty Toddy” for reasons that should be obvious by the title. Overall, though, Small Town Family Dream is slick, catchy Texas country that goes down easy, with just enough banjo to keep it from seeming too slick. JAB fans who wore through the band’s previous efforts will no doubt be busting out the bikinis and floating down the river to this one all summer long — or at least as long as radios are still legal on the river. — CODY OXLEY