John Fullbright: “From the Ground Up” 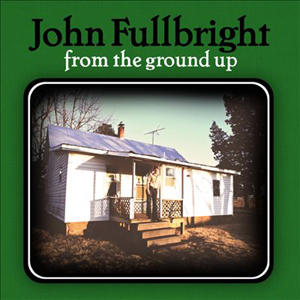 JOHN FULLBRIGHT
From the Ground Up
Blue Dirt/Thirty Tigers

How good is John Fullbright’s anxiously anticipated From the Ground Up? (Yes, anticipated — at least by the who’s who of fellow musicians whose admiration he’s already won this early in his career, and by the musically in-the-know masses who have been lucky enough to see and hear the young Oklahoman over the past few years as he’s generated considerable buzz at Folk Alliance conferences and SXSW.) Well, here’s how good: There’s not a songwriter in Texas — or Oklahoma, for that matter — who wouldn’t relinquish a body part to write just one song half as good as any of the 12 on From the Ground Up. Okay, yes, maybe a tad hyperbolic, but you get the point.

This won’t be one of those reviews that chalks all this magic up to Fullbright being one of those “old souls” who somehow writes well beyond their years, like they’ve somehow seen it all before, because, really, who believes that stuff? Well, ah, I kind of do … now. He’s brash and confident enough to come right out of the gate as none other than “Gawd Above,” a menacing and powerful co-write with fellow old soul Dustin Welch, that certainly is a testament (the old kind) to Fullbright’s ability to both rock it and put himself into some formidable, otherwordly and vengeful points of view. He then downshifts into the beautiful piano piece, “I Only Pray at Night,” and offers up the very human confessional “I only pray at night when the world disappears, put away and out of sight, I confront my fears, I am proud, I am strong, I’m endowed just as long as it’s light, I only pray at night.” Matters of faith and the questioning of same abound, and it’s clear that this musical prodigy son of the plains was paying as much attention during altar calls as he was to his piano teachers. Because later we find him on the corner of “Satan and St. Paul,” a song laced with spiritual and Biblical imagery in which he suggests “maybe when I’m a little older I won’t tell myself so many lies.”

And he proves he’s a versatile musician — in fact, a vaudevillian of sorts, with a social conscious — on “Fat Man,” a farcical look at those who control society’s puppets and its purse strings. Even a song about lost love, which could easily have been a sentimental cliché in the hands of one less gifted, becomes a beautiful and longing refrain as wrought by Fullbright in “Me Wanting You.” He closes the album with “Daydreamer,” which could serve as a mission statement for an intense 24-year-old singer-songwriter well aware of the expectations on a young poet with an old soul (there, I’ve said it).

Springsteen had Jon Landau’s “I’ve saw rock and roll’s future and its name is Bruce Springsteen.” Fullbright has Jimmy Webb’s proclamation that his fellow Sooner will very soon “be a household name in American music.” Never mind the fact that that kind of stuff doesn’t happen anymore in a world where Time and Newsweek and three television networks no longer dictate who we hold dearly in our houses and homes; John Fullbright’s building himself one hell of a reputation from the ground up. — D.C. BLOOM