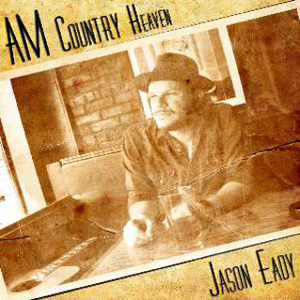 Jason Eady, a folkie with a bluesman’s grit in his groan, has never been one for the more rocking side of Red Dirt. But he’s no one-trick pony, either, as proven from the get-go on the Kevin Welch-produced AM Country Heaven, an unapologetically straight-up classic country record that veers drastically from the gothic delta and teary acoustic folk numbers from his previous releases. Such artistically shifting sands often create an unstable product, but Eady has made a believable musical crawl from juke joints and coffeehouses to the old-school saloons that are the perfect home for this record. While the modern-pop-country-hating theme of the opening title track is as played out as the subject of downing a Shiner-flavored kolache during a bluebonnet-colored Lubbock sunset, the contribution of virtuoso guitarist Redd Volkaert lends the FM Radio-basher a believability that’s often missing from songs that cloak themselves in a trendy topic. The majestic vocals of Patty Loveless on “Man On a Mountain” don’t exactly hurt the record’s country-cred, either. There’s a Big Bend-sized difference between pandering while sounding dated and proffering the sincerity of timeless warmth that Eady does here. Make no mistake: this isn’t a Texas country album, but an honest-to-George Jones country and western record conceived in the cheap beer and packed floors of Any Dance Hall, U.S.A. — KELLY DEARMORE