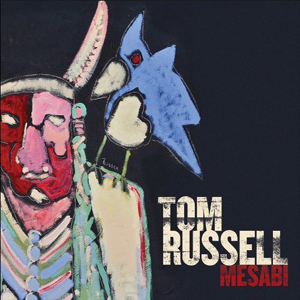 El Paso-based troubadour Tom Russell has been on one hell of a roll over the last decade, from digging deeply into his family roots on 1999’s The Man from Gods Know Where to tunneling into his own life with 2009’s superb Blood and Candle Smoke. The well-traveled and enduring folk/country/Americana fusionist — one half of the ’70s Texas duo Hardin & Russell — strikes again with Mesabi, a powerful 13-song cycle about love, death, fallen idols and dying border towns.

The album’s title refers to the frigid Minnesota iron range country that produced Bob Dylan, the 58-year-old Russell’s musical hero, and about the only one of his idols to survive and thrive on this collection. Dylan’s never mentioned, referred to only as “the kid” on the title cut, which opens the album by connecting the dots between a youth spent “listening to my Uncle George’s record player/While the great vinyl wheel spun round its holy prayer” and “the troubadour kid,” whose music no doubt spent a lot of time on that record player. Russell later revisits his musical hero on one of two bonus tracks, an earnest version of Dylan’s “A Hard Rain’s A Gonna Fall” that’s dragged down by Lucinda Williams’ indifferent vocal.

Sandwiched between are songs about his childhood “heroes and legends” who didn’t fare so well. Their work may live on, but their lives fare badly, whether it’s the drunken bitterness and “wounded sailor’s soul” of an actor who ratted out his friends during the McCarthy era in “Sterling Hayden,” or the sad demise of the man who gave pleasure to millions as the sweet singing voice of Disney’s Jiminy Cricket (“The Lonesome Death of Ukulele Ike”). He turns James Dean’s fatal car crash into a yearning for deliverance (“The Land Called ‘Way Out There’”) and offers a farewell toast to Elizabeth Taylor (“Furious Love (For Liz)”). The album’s mid-section is punctuated by songs about love (“Heart Within a Heart”) and the redemptive power of the movies (“Roll the Credits, Johnny”) before turning to bigger, more topical issues inspired by life on the border. On “And God Made Border Towns,” Russell details, with reportorial precision and a poet’s heart, the deadly cycle of drugs, immigration and death fueled by need and excess. “Our guns go ’cross the Rio Grande/Two thousand pieces everyday,” he sings with appropriate gravitas, “and the coke and weed and methamphetamine/Come sliding back the other way.” That segues nicely into the album’s most powerful song, “Goodnight, Juarez,” a chilling requiem for the once vibrant city across the river from El Paso that’s been turned into a “dark and violent battleground” by drug cartels. But he lightens the mood with “Jai Alai,” about an aging player of a game that time’s forgotten. And like the movies that created the fallen heroes he sings about, Russell gives Mesabi a happy ending, offering hope with religious overtones on “Love Abides.”

Russell uses his limited but expressive voice to great effect on these story songs, and with the help of co-producer and keyboardist Barry Walsh and a supporting cast that includes guitarist Will Kimbrough, singer Gretchen Peters and members of Calexico, he updates the folk-music traditions on which these songs are built with horns and other splashes of Mexican color. Mesabi is the sound of a master storyteller at the pinnacle of his powers. — DOUG PULLEN