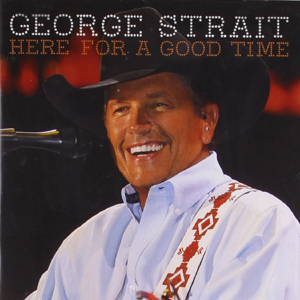 George Strait remains the standard by which all modern mainstream country singers are judged — as much for his classic cowboy demeanor and ability to sing songs like he’s talking to a friend as for the quality of songs he’s chosen over the course of a career that’s spanned three decades. On Here for a Good Time, a new facet of the largely silent Strait emerges: the personal revelations that — seemingly — come with writing your own songs. Teaming with son Bubba and Hall of Fame songwriter/Strait regular Dean Dillon, several songs contained on his latest mine the obvious theme of the small moments of romance. But the triumvirate also goes deeper — looking into the wages of alcoholism, forgiveness and faith for a sense of what the man behind the perfectly starched, button-down shirt ponders.

Why Strait would decide to try his own hand at writing now is hard to say; perhaps it was a curiosity about the process, or maybe a desire to speak in a more personal realm.  Regardless, there is a genuine tug to “Drinking Man,” a clear-eyed confession of the wreckage that started when “you’re 14 and drunk by 10 a.m.,”  and culminates in “Poison,” another core sample of the slow-build addiction you don’t realize is taking hold. More compassionate than high handed or judgmental, the tone of these songs  comes off as vintage Strait balladry at its finest.

Even “Three Nails and a Cross,” which takes the flash cards of hard times (the halfway house resident, the pregnant 16 year old) and suggests the classic Christian motif of forgiveness, comes off without being sanctimonious. A gentle nudge more than a fiery enjoinder, it is about the suggestion of a Higher Power, an inner peace, a state of grace that can balm the rocky places. Perhaps this reflection comes from Strait beginning his fourth decade as a top shelf country star. Whether it’s his own homage to the fans, “I’ll Always Remember You,” or a slightly world-weary read on Richard Thompson’s “A Showman’s Life” ­— a sobering reflection on everything unseen for the spotlight’s blinding glare, delivered with a gravitas that speaks to the knowing of this song from the inside out — this is a statesman looking back.

Not that all is dour and reflective in the Court of King George, though. With the percussively-driven hangover ‘n’ fishing anthem “Blue Marlin Blues” and the shuffling “Lone Star Blues,” which celebrates life as the young bucks live it, the nod to good-timing is obvious. And the title track celebrates getting what you can — even in the eye of disappointment and done wrong — with a clear-eyed bonhomie.

Is this definitive George Strait? Hard to say. Given his reticence, he is still more enigma than a “look at me, look at me, wheeee! How clever can I be…” 21st century superstar; but with the willingness to write his own songs, there’s more a sense of personal truth than ever before. Employing twin fiddles, loping ballads and splashes of piano, Strait has again crafted a collection of classic country: lean, to the point, moving from Cajun to swing, spoken revelations to romantic waltzes. After all these years, he represents all the truest forms of a genre increasingly going the way of poodle metal, bloated AC and glossed pop with steel guitar as camo. — HOLLY GLEASON