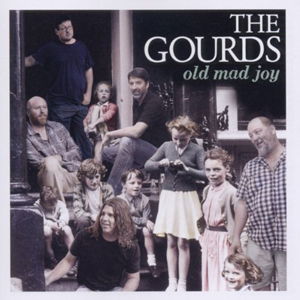 The Gourds have officially entered peak season. The elastic Austin-based quintet’s Old Mad Joy spikes three straight crescendos — Heavy Ornamentals (2006), Noble Creatures (2007) and the absolutely seamless Haymaker! (2009) — with a mighty exclamation point. Simply put, this is their most beefy (“Drop the Charges”) and buoyant (“I Want It So Bad”) collection yet. The winning formula: An ace behind the boards, sharp songwriting (Kevin Russell’s “Two Sparrows”) and adventurous spirit (Jimmy Smith’s “You Must Not Know”). Legendary producer Larry Campbell (Bob Dylan, Levon Helm) shows no favor, equally fortifying vibrant snapshots (Max Johnston’s excellent “Haunted”) and languid story songs (“Ink and Grief”) with kindred vision. Lyrics frequently mirror the pulsating grooves’ immediacy. “.38 pointed at my heart/Grenade pin in my teeth,” Smith sings on the gnarly Exile-era Stones dirge “Drop What I’m Doing.” “Let me drop what I’m doing/because I need you so.” Old Mad Joy might not trump Haymaker! as the band’s finest hour, but it undoubtedly thrusts them further toward the next level. Suggestion for Campbell: Score these guys a nationwide tour with Dylan. This band and these songs demand keen ears. — BRIAN T. ATKINSON