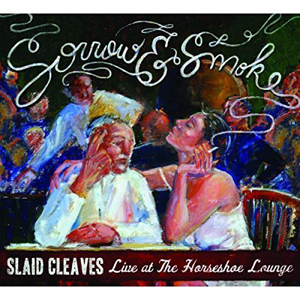 Considering the average three or four-year span between his new releases, it’s a little surprising that Maine-born, Austin-based singer-songwriter Slaid Cleaves hasn’t issued a live album before now, just to fill one of those gaps. But just as has always been the case with his studio albums, when Cleaves finally delivers, he delivers in spades. Sorrow & Smoke: Live at the Horseshoe Lounge especially benefits from the long wait, because its 21-song set list (spread across two discs) serves as a career-spanning greatest-hits showcase, with plenty of room for not only all the expected Americana-radio calling cards (“Broke Down,” “Wishbones,” “New Year’s Day” and, naturally, “Horseshoe Lounge”), but equally fine “album track” gems like “Key Chain” and “Below,” more recent winners like “Cry” (from 2009’s Everything You Love Will Be Taken Away) and even a brand new song, the excellent “Go for the Gold.” The second disc even features a pair of old Don Walser covers, allowing Cleaves to dust off his impressive yodel (“You guys better have a plan B in case I go down on this one,” he quips to his band before starting the late “Pavarotti of the Plains” standard, “Rolling Stone from Texas.”) The band is technically just lead acoustic guitarist Michael O’Connor and accordion/harmonica/trumpet player Oliver Steck, but everyone crammed into the small South Austin bar (more of a neighborhood watering hole than regular music venue) plays a key part, too, whoopin’ and hollarin’ in all the right spots (including lumberjack gang vocals on “Breakfast in Hell”) and affording the quieter songs listening-room respect. Cleaves’ studio catalog is too consistently good to bypass completely in favor of any one anthology, but for longtime fans and newcomers alike, Sorrow & Smoke is essential. — RICHARD SKANSE