Todd Snider: “Time As We Know It: The Songs of Jerry Jeff Walker” 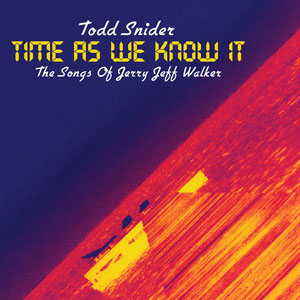 TODD SNIDER
Time As We Know It: The Songs of Jerry Jeff Walker
Aimless Records/Thirty Tigers

Todd Snider recording an album of Jerry Jeff Walker songs is the very essence of the term “no-brainer” — and for better or worse, Time As We Know It embodies all the aspects of that term.

I might as well deal with my misgivings right up front. These are all pretty straightforward, reverent versions of these songs. There’s nothing wrong with that, except that as I listen to this record, I can’t help but wish for the glorious, muddy, “Exile In East Nashville” vibe-y mess that was Snider’s last album, Agnostic Hymns and Stoner Fables (released earlier this year.) That sort of irreverent approach (no doubt inspired in some way by Jerry Jeff) is just what this record needs. Don Was’ production is faultless but that, in fact, is its singular fault. It’s as if Snider loves these songs too much to “Todd-ify” them. “Reverence” and Jerry Jeff Walker are too things that should never be mentioned together.

Even with all that said, though, there’s an awful lot to love here as well, especially if you have been reluctant to negotiate the minefield that is Walker’s catalog. It’s the pretty ones that reel you in. Snider’s voice pours honey and lemon all over “Derby Day,” “Railroad Lady” and “Laying My Life on the Line.” “Vince Triple O Martin” and “Moonchild,” meanwhile are a couple of songs that I am not as familiar with as some of the others, and both are highlights that actually benefit from Was’ production.

It’s hard to find fault with the rest of the Walker covers here, but it’s also hard to say they improve on the originals. That’s not to say I won’t pop this in on occasion. What’s not to dig about 15 great songs performed by one of your favorite guys? Still, given the choice between this and Agnostic Hymns at the record store, grab the latter first. This one’s more for the Snider (or Jerry Jeff) fan who already has everything — or maybe for the drunk dudes at the merch table with an extra $20 in their pocket. — GREG ELLIS