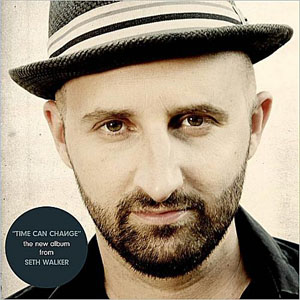 Talk about understated. Former Austinite Seth Walker, who moved to Nashville a few years ago, has gone elemental on his latest release, using his formidable guitar skills more as an embellishment of his vocals than a focal point. Considering his residency in not one, but two guitar-revering towns, that’s a bold step. The whole album has a dialed-down feel; leisurely tempos, tasty licks with a few flourishes here and there … nothing fancy. It puts the emphasis on his oh-so-nuanced vocals, and the effortless-sounding keyboard wizardry of pal Kevin McKendree. “Stronger Than You Need to Be,” “Found Myself Lost” and “I’ve Got a Thing for You” carry varying degrees of funkiness, with a bit of bossa-nova added to that middle one — one of two co-writes with Nashville songwriting/producing go-to guy Gary Nicholson. It’s also one of the few songs in which Walker breaks out a bit on guitar. Perhaps Walker’s best vocal moment comes in “What Now,” in which he conjures his best jazz-club Ray Charles, with McKendree’s delicious ivory-tickling, Derrek Phillips’ drum brush swirls and Steve Mackey’s standup bass adding to the smoky effect we can feel emanating through the stereo. Not surprisingly, he employs Nashville faves the McCrary sisters for backing vocals on a couple of songs; very surprisingly, he’s got Raul Malo contributing bass to a track. Bass! How about some duetting, guys? That we’d like to hear! Not that Walker doesn’t do an admirable job by himself. — LYNNE MARGOLIS

Previous post Todd Snider: "Time As We Know It: The Songs of Jerry Jeff Walker"