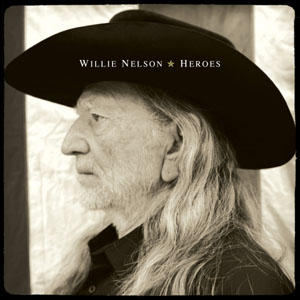 Heroes isn’t a classic Willie Nelson album, but it is a very good one. It takes a while to get there, though, given that all of the clunkier tunes are clustered near the front of the record. His remake of “A Horse Called Music” is just as embarrassing now as it was the first time he recorded it back in 1989; Tom Waits’ secular spiritual “Come On Up to the House” goes on too long; and “No Place to Fly” is a collection of lyrical clichés. But once you get past those songs, you’re treated to a program of classics, old and new. Willie’s son Lukas contributes “Every Time He Drinks He Thinks of Her,” a drinking song with a thumping Waylon Jennings-like beat, and “The Sound of Your Memory,” a weeper that’s more emotionally complex than your average country tune, with a hint of rock in its delivery. The three songs penned by Willie himself are all keepers, too. “Roll Me Up and Smoke Me When I Die,” sounds like it was written under the influence of his favorite herb (obviously); the autobiographical “Hero” (featuring Billy Joe Shaver and Jamey Johnson) is a solid song about a musician’s life on the road; and the spiritual “Come On Back Jesus” is full of snarky humor. Covers include country chestnuts as well as Pearl Jam’s “Just Breathe” and Coldplay’s “The Scientist,” both of which stay pretty close to the original arrangements. — J. POET

Next post Todd Snider: "Time As We Know It: The Songs of Jerry Jeff Walker"