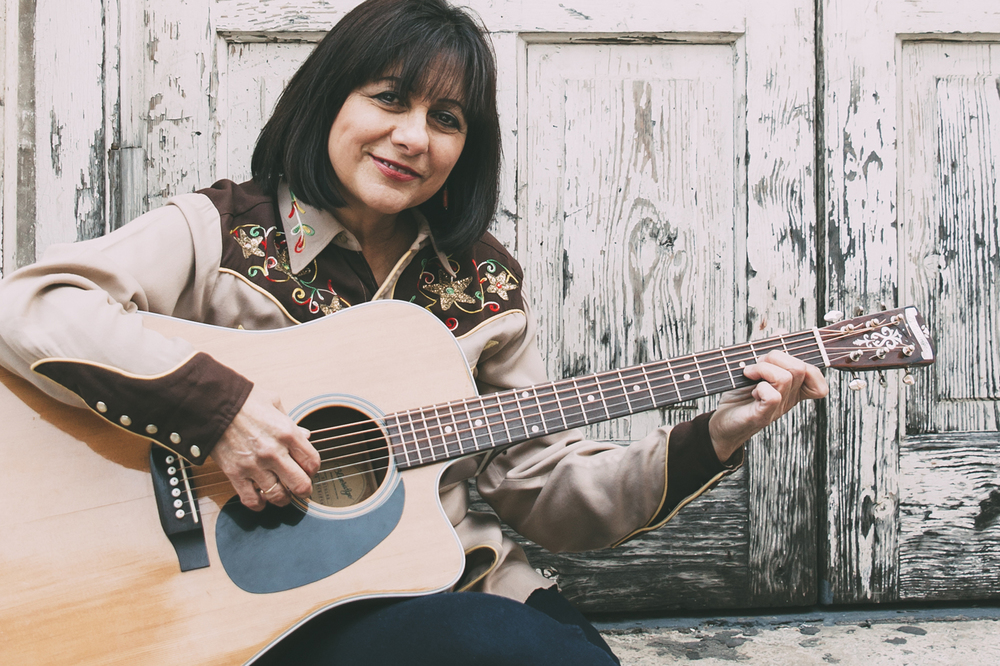 Although Tish Hinojosa hasn’t lived there for more than 30 years, in her heart, San Antonio will always be home. Specifically, the two-story, five-bedroom house in the historic Tobin Hill neighborhood that her Mexican immigrant parents started renting back in 1965, when Hinojosa was 10 years old. Seven years later, after her father’s death, her mother bought the house and would live in it for the rest of her life. Tish, the youngest of 13 children, was the last one to move out — but not before discovering her voice and sense of purpose inside of its familiar walls.

“That house is where the seeds of my music were planted,” she says today. “It’s where I learned to play guitar, and where I first started dreaming of becoming a singer.”

Hinojosa would follow that dream outside her front door to modest gigs playing for tourist tips on the nearby River Walk, her first baby steps on a lifelong journey that would take her from San Antonio to Taos to Tennessee, Austin, and as far away as Hamburg, Germany, where she lived for eight years before moving back to Texas in 2013. Along the way, she would record a handful of major-label albums ranging in style from contemporary folk to country, pop, and Spanish corridos, garnering critical acclaim for both her songwriting and one of the purest, prettiest voices to ever come out of Texas. In the mid-90s, she even had the opportunity to sing for President Bill and Hilary Clinton at the White House. 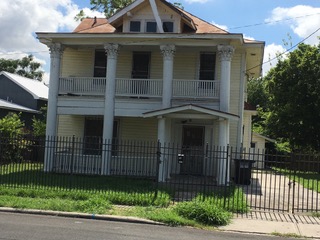 The house in San Antonio’s historic Tobin Hill neighborhood that songwriter Tish Hinojosa grew up in — which she now wants to buy back and turn into a community focused “Home for the Arts.” (Photo courtesy Tish Hinojosa)

Hinojosa was living in Austin and raising a young family of her own by then, but the memories of her beloved childhood home in San Antone remained ever on her mind. It’s long loomed large in her music, too, having been memorialized in one of her most popular songs, “West Side of Town,” from her major-label debut, 1989’s Steve Berlin-produced Homeland. But anytime work or other business took her back to the Alamo City, she would often find herself going out of her way to “stalk” the old 1910 house she grew up in, driving by just to see how it was holding up and to make sure it hadn’t been leveled to make room for condos. (To her delight, she recently found out that the Tobin Hill Neighborhood Association has deemed the house “historic” and thus technically safe, so long as it’s still fit to stand — though condos have already replaced a number of other houses in the neighborhood, including the one across the street which was occupied by Henry B. Gonzalez and family during part of Hinojosa’s childhood.)

Tish and her siblings ended up having to sell the family house back in 1985, after the passing their mother, Maria Del Refugio Coronado Hinojosa. But when the house went on the market again two years ago, she began entertaining thoughts of buying it back — not just to move back into herself for the sake of lovingly restoring and preserving it, but to share with the community as what she calls a “Home for the Arts.” Drawing on her memories of how much her mother loved to host company and her own experience as touring songwriter, she envisions it as an ideal venue for intimate house concerts, art exhibits, songwriting and music workshops, book readings, kids programs, and all manner of other regular community events. She also wants to offer its spare bedrooms up to fellow musicians and fans alike — just as her mother “Cuquita” did back in 1968, when she supplemented the family’s modest income by cramming everyone into three of the five bedrooms so she could rent the other two out to visitors during that year’s San Antonio-hosted World’s Fair. “My mother was doing the B&B thing long before it was even a thing,” Hinojosa marvels with a laugh.

As excited as she was thinking of all the possibilities she imagined for the house, though, the asking price was out of her range at the time, and remains so even now, after the house hit the market again earlier this summer marked down by more than $100 grand. Hinojosa says she has enough in savings for a down payment and could easily make the monthly mortgage (considering what she currently pays in Austin rent, having regrettably sold her last Austin place prior to moving to Germany for a marriage — her second — that ended in 2013). The problem, she explains candidly, is her credit, which was wrecked under the weight of the mountain of medical bills she incurred in the wake of a botched abdominal surgery in 2015 that knocked her off the road and out of work for six interminable months.

“The doctor made this terrible mistake during this stupid little surgery I had, and I actually would have died if one nurse passing by me while I was in the recovery room hadn’t noticed that I was flailing about and dying,” she explains. “I actually basically did die; my lungs collapsed and I lost a lot of blood due to horrible internal bleeding … there was no pulse.”

Although Texas tort reform laws heavily favor doctors and hospitals in malpractice suits, a lawyer friend was able to get Hinojosa a small settlement out of court, and insurance through the Health Alliance for Austin Musicians (HAAM) helped her out considerably when further complications from the same operation necessitated a second operation more recently. But the damage was already done. Through no fault of her own, she says, “my credit is shot, to the point where now not one mortgage company or bank or anybody will give me a loan for $200,000 to buy a house.”

Instead of giving up, though, Hinojosa finally decided to do something she admits she was too embarrassed to try back in the midst that “whole hospital and doctor quagmire” two years ago: ask for help. Earlier this month, she took a leap of faith and went public with her dream by launching her first GoFundMe campaign, “Tish Hinojosa’s Home for the Arts.” 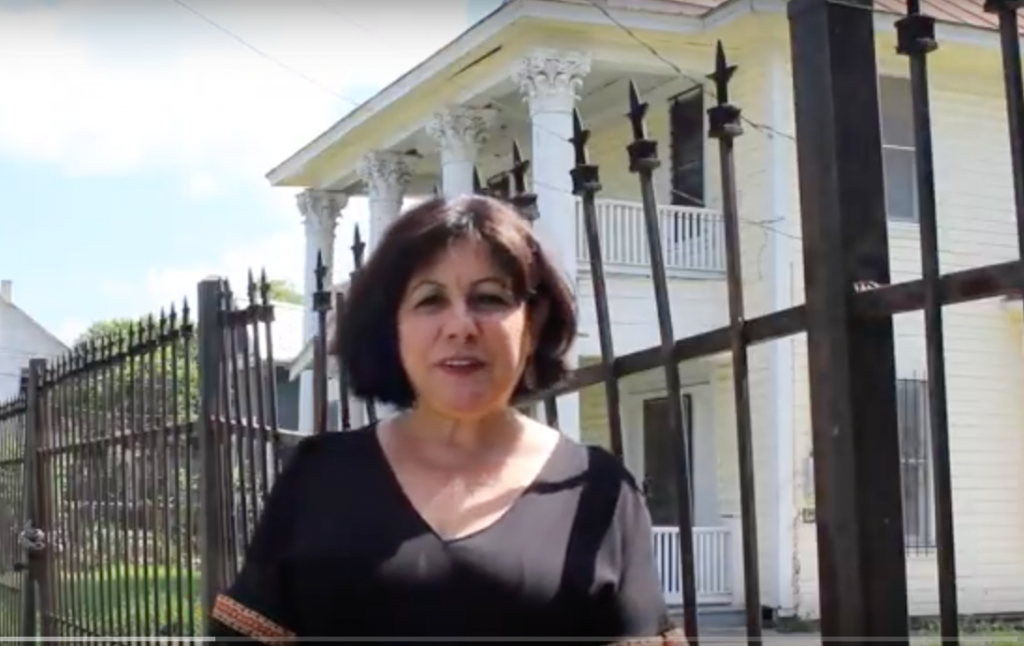 Tish Hinojosa outside of her childhood home in San Antonio. (Screenshot from her GoFundMe campaign video)

Online crowdfunding, particularly by independent artists, is certainly nothing new. But Hinojosa’s campaign is, to put it mildly, considerably more ambitious than the average “help me raise $10-$30k to record and release my new album” pitch. In lieu of the traditional bank loan route that’s not an option for her given her credit status, the singer is hoping to raise $190,000 — which, combined with the $30,000 she has left in her savings from the hospital settlement, would be just enough to buy the house in Tobin Hill. She admits upfront that it’s a tall order, but shy of finding someone willing to co-sign a loan with her, she sees it as her only resort.

“I’m biting off a big chunk here, and I know there’s a chance it could fail,” Hinojosa concedes, albeit adding that if she raises, say, even half of her target goal, she might have better luck landing a smaller loan to help make up the difference. Regardless, if things don’t work out, she insists she has no designs on keeping the money. “Everybody will get their money back if I don’t reach my goal,” she says, “because I honestly don’t need the money if I can’t get the house.”

But of course she hopes it doesn’t come to that. She’d much rather have the opportunity to thank her donors via the various rewards being offered through her GoFundMe campaign, or even meet and greet them all in person at one of the many house concerts she hopes to have at Tobin Hill, be it as a performer herself or as happy hostess booking old friends like Butch Hancock or younger San Antonio singers and songwriters just starting out on their own journeys.

At present, Hinojosa still has a long ways to go to make all of that a reality. She also knows that any day, another interested party could come along and buy the house before she has the means to make a firm offer. But bar that, she’s determined to let optimism be her bellwether — just as it was when she first moved away from home to chase her dream in 1979.

“My family thought I was crazy back then for pursuing the music business, but then I’ve always kind of been the only risk taker in the family,” she says with a laugh. “I’ve never done the ‘safe’ thing. I’ve taken chances, and I’ve made mistakes, but I’ve had an incredible life, with friends all over here and Europe that I’ve made through this life of mine. And so now, with this house thing … I just figure if it’s going to happen, it’s meant to be. And if it doesn’t work, well … the worst thing would be would be if I never tried. At least I can say now I’ve tried.”

Next post Steve Earle & the Dukes: "So You Wanna Be an Outlaw"

Previous post Jason Isbell and the 400 Unit: "The Nashville Sound"