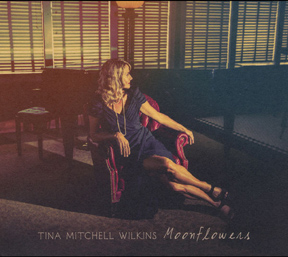 Best-known in her adopted home of Texas for frequently accompanying her venerated singer-songwriter husband Walt Wilkins on record and onstage, Tina Mitchell Wilkins isn’t just a Lucy Ricardo trying to get in on the act: she’s a singer of depth and range, worthy of the undiluted spotlight at least once in a while. Her previous effort Espiritu framed her sweetly empathetic voice in engaging country-folk, but Moonflowers steps out of the sunshine and into the nightclub for a set informed by lounge-friendly jazz and pop. Pre-war standards like Billie Holliday’s “What A Little Moonlight Can Do” and Etta James “At Last” get a fresh coat of paint with producer Bart De Win’s subtle, smoky piano and keyboard work, alongside dependable ringers like Warren Hood on violin and Walt Wilkins on guest vocals (slightly out of his wheelhouse but as handsome-voiced as ever). Tina also brings some new material to the table, both her own noteworthy co-writes and a couple of left-field choices for this setting: Sting’s ’90s solo hit “Fields of Gold” reworked as a torchy piano ballad, and Jimmy Cliff’s reggae classic “Sitting Here In Limbo” reimagined as a fetching jazz shuffle. If you or someone you love wonders why nobody makes this kind of music anymore, aside from the occasional Harry Connick Jr. or Michael Buble record, Wilkins’ nightclub diversion may make your day. — MIKE ETHAN MESSICK