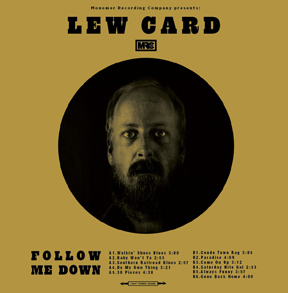 Veteran Austin sideman Lew Card has spent a good chunk of this decade exploring what it’d sound like to just sing and write his own songs. So far, so good. With Follow Me Down, he’s kept all of the good things about his full-length debut (2014’s subtly engaging Low Country Hi-Fi) and made them better.  His sly, bluesy phrasing and hard-luck narratives have sharpened in the light of slightly higher-fi production, with a bigger-band feel augmented notably by the Tijuana Trainwreck Horns (Mark Wilson and Tiger Anyaya, to their friends). At its best, it grooves like New Orleans by way of Austin, cracks wise like John Prine by way of Randy Newman, and moves like a bayou boogie by way of a landlocked Central Texan who gets it. Although some ambitious pieces like “30 Pieces” bust out of the bluesy mold, Card isn’t typically breaking new ground here, but he’s making the most of his piece of it with soul and wit. — MIKE ETHAN MESSICK