The Will Callers: “What Else Is Left?” 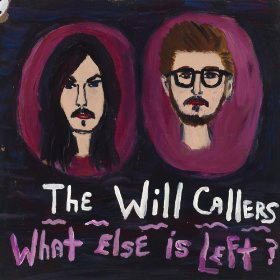 THE WILL CALLERS
What Else Is Left?
Mystery Egg Records

The bar-hopping, roots-rock duo at the heart of the Will Callers are among the generation of artists young enough to owe an audible debt to the stripped-down progressive blues of the Black Keys, but they’re also among those wise enough to recruit no less an artist than Ray Wylie Hubbard as co-producer to help steer their full-length debut towards Texas music nirvana (with friends the caliber of George Reiff, Scrappy Jud Newcomb, and Brad Rice in tow). There’s an unmistakable tilt towards the smoky groove of the last few Hubbard albums at play here, unsurprisingly, but the youthfully urgent tone of the singers (as well as a few well-placed, chiming harmonies) and the influx of modern garage-rock influences suitably differentiates it from their mentor. The lyrics don’t always grab that fifth gear along with the music; despite some sweet hooks at the center of standouts like the playful title track and the rich metaphor of “House of Falling Cards,” things sometimes get a little paint-by-numbers between the choruses. That’s not a fatal flaw, though — just room to grow for a band that might well be unstoppable with a little more poetic license in between those grooves. — MIKE ETHAN MESSICK