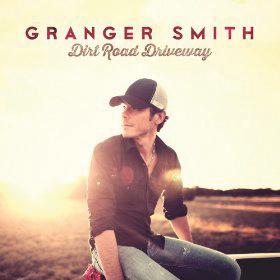 If there were a Most Likeable Artist category in the annual Lone Star Music Awards, Granger Smith would probably be a regular contender for the trophy. Smith’s humanitarian pursuits supporting the troops with the Boot Campaign and helping teens stay safe on the roads with his “Don’t Text and Drive” program are nothing short of admirable. And what’s not to love about his good-humored, genre-spoofing creation, Earl Dibbles Jr.? Smith’s backwoods, snuff-dipping alter ego became a viral sensation and is imminently funnier than the catalogs of Colt Ford and Cletus T. Judd combined. Generous guy that he is, Smith gives Dibbles room for two songs on his new album — the fan-favorite, rocking anthem “The Country Boy Song,” and the new “Country Boy Love.” And if the jokey tunes kind of steal the show from the real “Smith” songs on Dirt Road Driveway, it’s all good. Smith chooses to rock a bit more on this record than he has in the past, and every tune is catchy and memorable. He may not be breaking new thematic or lyrical ground with songs like the mainstream radio-ready “We Do It in a Field” and the slice-of-life country tune “Miles and Mud Tires,” but that’s not the point here. This is earnestly delivered, affable Texas country music made to sing along to (along with a little tongue-in-chaw-stuffed-cheek satire for good measure), and an assured step forward for both Smith the likeable comedian and Smith the artist. — KELLY DEARMORE

Previous post The Will Callers: "What Else Is Left?"